50 Million Brunch Fans Can't Be Wrong, Can They? 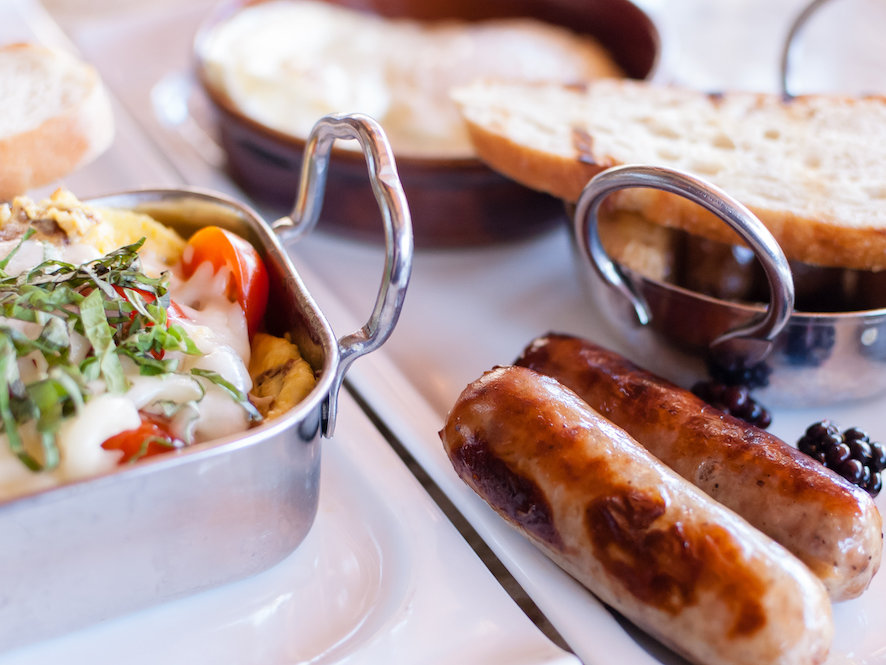 People love brunch—eggs, bacon, and Bloody Marys. You’d think, in cities around the world, that they were giving it away, based on the Sunday morning lines. Yet, never do I, a food writer and person who very much likes bacon and eggs, feel less on the wavelength with popular food culture than when the discussion turns brunch-ward.

I am a brunch hater. When it comes to this weekend meal, my heart is three sizes too small. At the very suggestion of standing outside to wait to eat breakfast foods, my eyes audibly roll in my head and I sigh like Mandy Patinkin getting more bad news about Carrie Mathison. Again with this? Brunch combines so many things I hate: lines, poor service, outrageously high margins on food cost, and close proximity to the type of people who use #roseallday when they post on Instagram. Is my antipathy to brunch nature? Nurture? It’s impossible to say from whence my French toast antipathy emanates. A bartending job at a high-volume restaurant in college (working brunch shifts) did not help matters, especially the day when I spilled a gallon of Bloody Mary mix on myself. Like some kind of skunked dog, I smelled of tomato juice (and horseradish) for days afterward, no matter how many times I showered. It was not a great week for me, and perhaps that is what soured me on brunch as a whole.

When I saw that this year’s Feast Festival in Portland featured a “Brunch Village” I thought, maybe exposure therapy will change my mind? After all, brunch is beloved here in the Rose City, as cherished a civic institution as a longtime news anchor or favorite swimming hole. They even seem to like waiting in lines for it. Was my reaction to Portland’s brunch fandom (horror, followed by a desire to drive to the nearest pho restaurant) in the wrong? Was I missing something? I challenged myself to head into the bacon-wrapped belly of the beast to find out.

Feast, now in its sixth year in Portland, brings in chefs from across the globe to celebrate the best of food and drink in the region and raise money to fight childhood hunger in Oregon. It’s a large, and for the most part well-run, festival. So, before the gates to the Brunch Village in Pioneer Courthouse Square opened, when I found myself in a line that already snaked around the block, I thought, this is fine. I was fine. What was there to fear, other than brunch itself?

Inside, vendors lined the outer ring of the steps around the rust colored bricks of Pioneer Courthouse Square, with more vendors inside at street level. A good-sized crowd of people in their 20s and 30s, the kind of folks that Peggy Noonan and David Brooks worry spend too much money on avocado toast, milled about inside. They looked neither financially strapped nor worried about the direction of the country. Instead, they were focused on the spread before them. There were kombucha mocktails and a Bloody Mary bar with hush puppies to garnish your drink. There were BBQ lamb biscuits and Flint corn cakes and toad in a hole benedict with Dungeness crab. The options to eat and drink were unimpeachable, a veritable brunch wonderland.

Do you know what you’ll find when there are 13 fine purveyors of brunch-type foods, from Mae to Tusk to Butcher & Bee, all in one location? Why, 13 different long lines. Even at quarter past eleven, lines for many of the brunch vendors doubled back on themselves. I heard one line-stander chirp that their line didn’t seem bad—it should only take an hour. This for a bite of fried chicken and donuts.

What I came to recognize was that brunch and I have a fundamental disagreement with one another. Call it artistic differences. For some, eating is what you do for fuel, or perhaps to make feelings disappear. For brunch lovers, there is a food aspect, but it’s about the social aspect of the meal just as much. To them, it doesn’t matter that the lines seemed to melt together into a teeming morass of people eager to add more pickled items to their Bloody Marys. It wouldn’t have mattered if they were waited on by the surliest of servers, or if the eggs were room temperature from the moment they left the pass. The teeming, the togetherness, that was the entire point of the endeavor. For them, the fact that the gravy on the biscuits isn’t reaching them at an optimal temperature, or that the pours for the champagne were eensy was irrelevant. They were with their friends.

So, we must agree to disagree about stunt food and how waffles might taste better if they are not presented in quite so Instagrammable a fashion. I don’t like lines and I don’t like crowds and the smell of horseradish and tomato juice gives me PTSD. Fine. I can agree with even the most die-hard of brunch fanatics that eating together with your friends is one of the best ways to eat, any time of day or day of the week. Once they’re sick of hollandaise and limp English muffins, they can come meet me for dim sum, and we’ll have a great time together. At brunch.