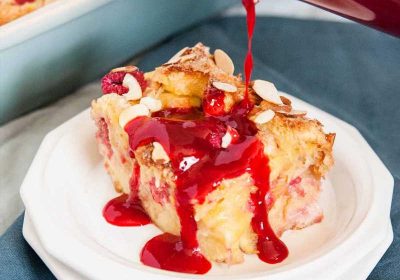 Creamy vanilla custard poured over layers of tender brioche and juicy peaches, baked, and served with a just-barely-sweet raspberry sauce. This baked French toast casserole is one for the breakfast record books!

The foundation of this French toast casserole is a dessert called Peach Melba. Famous, perhaps, as much for its simplicity as its beauty, Peach Melba is little more than vanilla ice cream, ripe peaches, and raspberry sauce. Occasionally, almonds are added.

The dessert was created by famed chef Auguste Escoffier and named after the opera singer, Nellie Melba, who dined in his restaurants.

It’s everything I love about the dessert, only made for the masses and eaten for breakfast! Although, I’m not ashamed to say, French toast casserole easily becomes bread pudding when topped with a scoop of ice cream and served after dinner.

HOW TO MAKE FRENCH TOAST CASSEROLE

Making French toast casserole really isn’t much different from making regular French toast. You still make a custard base out of eggs and cream, and soft bread is still soaked in the custard. The only difference is you bake it in the oven, rather than fry it on a skillet.

The good news is you have plenty of options! I would stay away from traditional American sandwich bread. It’s just not sturdy enough, and it’s usually sliced thinner than what you need for this casserole. My top picks are:

I like to cut my bread thick to make about 2-inch cubes, but anywhere between one and two inches is fine. Sometimes I don’t even bother with the knife. I just let my kids tear it into pieces and call it good. You can also use fresh or day-old bread. No need to remove the crust or be too precious about how you cut the bread. This is breakfast, and nobody has time for that.

I like heavy cream in anything custard-based, but if that’s too rich for your liking, feel free to go with a lighter option. Whole milk or half-and-half would work well.

If you get into the lower fat milks like 2 percent or skim milk, the custard won’t be quite as thick and could impact the texture of the dish. You may need to bake it a little longer.

Simplicity is the driving factor behind the dessert on which this French toast casserole is based. With that in mind, I first tried it with fresh peaches, leaving the skin on. My kids rejected the peaches with skin, even though they were sliced thin.

For round two I blanched the peaches, then peeled and sliced them. It worked great but was time consuming.

For my third stab at it, I used frozen peaches, which I thawed and sliced thin. I prefer this method because it was faster, and I didn’t have to worry about making sure my peaches were at the proper stage of ripeness to successfully remove the stone.

CAN YOU MAKE THIS OVERNIGHT?

Yes, you can! I actually prefer making this the night before. Dice the bread, layer the fruit, and pour the custard over the top. Press everything down gently so each piece of bread has a good soak. Cover with aluminum foil, and keep it in the fridge overnight.

The next morning, let it sit on the countertop for about 30 minutes to take the chill off (this also helps it cook evenly). Sprinkle the top with sugar and slivered almonds, and bake!

If you’re not a planner, that’s okay too. You can also make this right before putting it in the oven. It will still wow and please everyone at the breakfast table!

HOW TO MAKE RASPBERRY SAUCE

The raspberry sauce is easy to make, but it does require dirtying a few extra dishes, which in my opinion is worth it. I strain the seeds out for a nice, smooth sauce, but if you don’t mind the seeds or the texture, you can skip that step.

The sauce, which isn’t overly sweet, will keep for five to seven days in the fridge and also makes a great topping for ice cream, or stirred into cocktails or mocktails (if you strained the seeds).

HOW TO STORE FRENCH TOAST CASSEROLE

French toast casserole is best the day it’s baked, but it will keep covered in the refrigerator for up to four days. Just reheat it in the microwave or low oven.

CAN YOU FREEZE FRENCH TOAST CASSEROLE?

Yes! You can freeze this casserole. Make it through the step where you pour the custard over the bread and fruit. Cover it with plastic wrap, then wrap it in foil. Thaw it in the refrigerator for 24 hours before baking as directed.