The Best and Worst Bacon from Fast Food Restaurants 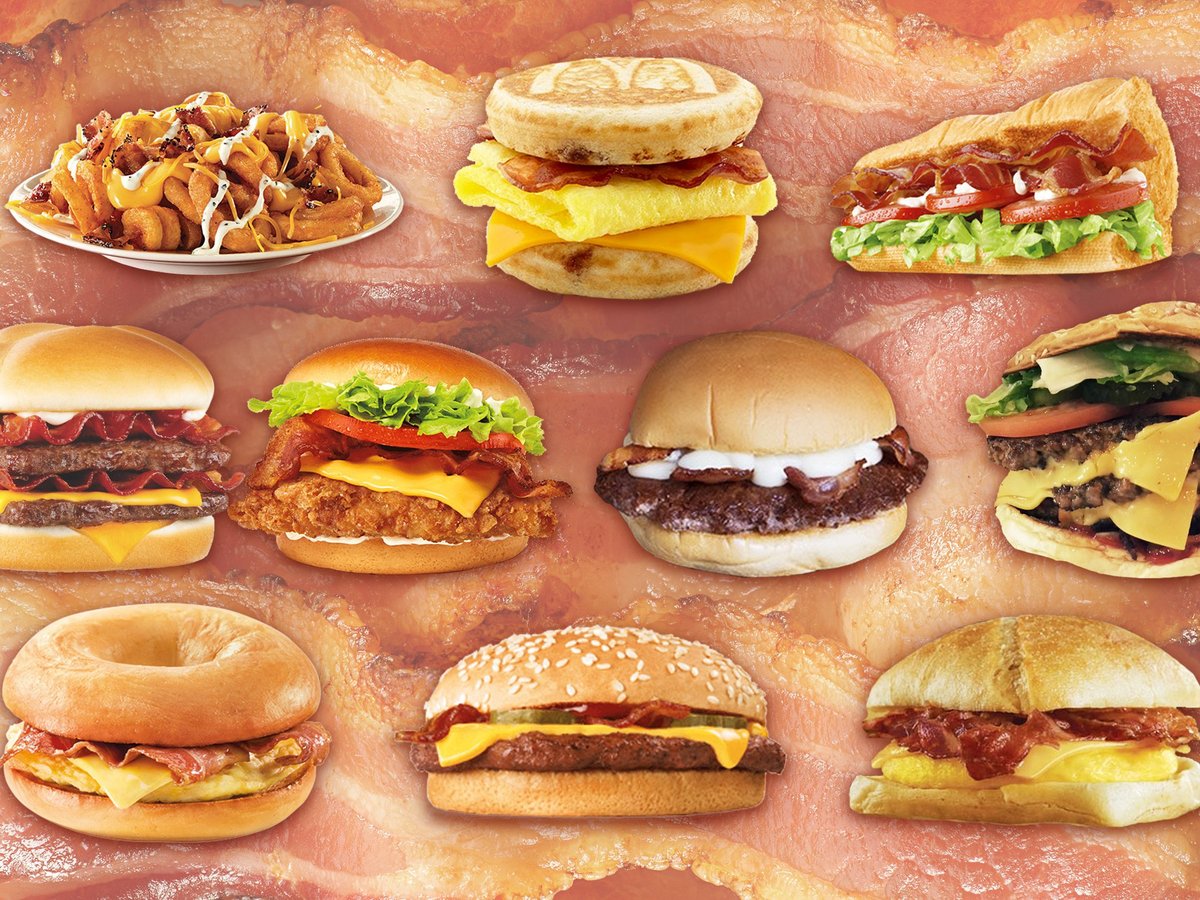 I am writing to you from what must be the seventh straight year of bacon glorification, and I am sorry to report that the situation on the ground is anything but epic. While the nation’s culinary hotspots seem to have ditched their bacon-swizzle stick bloody marys, fast food restaurants have picked up the slack. The “bacon makes everything better” ethos is alive and well, at least in the minds of whoever comes up with drive-thru novelties. At Arby’s, you can add a slice of brown sugar bacon to a shake; at Burger King, you can add it to a chicken sandwich. At both these places, it will be lackluster.

Part of the problem is that bacon resists automation. It’s easy to cook, but you have to pay attention to it, and it doesn’t cook nearly as fast as a hamburger patty. If you let it sit around, it quickly loses its charm. To get around this hurdle, many fast food places resort to using pre-cooked bacon. It’s not always bad, exactly, but it’s never as good as what you’d make at home. (I don’t feel this way about hamburgers or tacos or almost anything else.) Bacon is now seen as a condiment and treated with the kind of afterthought once reserved for shredded lettuce and watery tomatoes. The flavor is fine, usually, but it’s clear that the absolute minimum effort went into everything but the marketing.

I know this because I recently tried the bacon at ten fast food restaurants around New York City. My method for this was to order a sandwich topped with bacon, then remove the bacon and only review that. There were a few bright spots—some of them surprising—but, for the most part, fast food bacon is a thin, chewy beige leather strap reminiscent of a week-old bandaid in both color and texture.

Here’s what I thought of each restaurant’s offering, from worst to best.

I always think Burger King is going to be slightly better than the average fast food place, until I remember that it’s just slightly more expensive. The bacon on my crispy Bacon & Cheese Crispy Chicken Sandwich was cold and brittle, with the texture of a weird tree. There was a chemical aftertaste, which reminded me that my meat was probably cooked weeks ago, then reheated in an industrial microwave of some sort, and left to sit for hours until some sucker (me) ordered it.

At Arby’s I got the “loaded fries,” which, came topped with ranch, cheese, and bacon. I didn’t realize this based on the picture on the menu, but the bacon on this was cut into pieces, like fancy Bacon Bits (so, still not that fancy). The pieces were uniformly crispy, with a strong pepper taste that reminded me of the jerky I used to buy from tubs at 7/11. They were fine. (The fries were really good, but the fries are not on trial here.)

Unlike most other fast food places, Starbucks doesn’t punt on the bun. Their breakfast sandwiches come on English muffins that aren’t great but aren’t just white bread nothingness. Unfortunately, like most fast food places, Starbucks does punt on the bacon. Their sandwiches are pre-made, then popped into an oven, so while the whole thing warms, the bacon doesn’t get direct heat. Consequently, the thin strips become they are are flimsy and chewy. The flavor is actually pretty good, but so much of bacon’s appeal comes from its texture, which Starbucks totally fails.

Despite my long-held soft-spot for Subway’s BLT, I know that their bacon is decent at best. They don’t even hide that it sits out in bins, waiting to be reheated on your sandwich. The thing is, those ovens get foodthings hot, and as long as you eat it right away, you’re good. There’s definitely a slightly metallic aftertaste, and it’s greasier than you’d want, but, overall, their bacon still improves the sandwich, and that’s really what’s important.

Most people who eat pork products like bacon, but somehow it got branded as this macho thing for men with the personalities of 8-year-old boys. This manifests itself in bacon sandwiches having names like “Son of Baconator,” which is what I ordered at Wendy’s. (His father has two patties.) I would much prefer to just be able to say, “I’ll have the bacon cheeseburger,” but no such luck. That complaint aside, Wendy’s offering tasted pretty good, and it was thicker than many of its competitors. What stopped it from being great is that it was a bit tough and lukewarm, rather than hot or crispy.

Five Guys’ Little Bacon Cheeseburger was the most expensive thing I ate for this article, and I had assumed it would be among the best. Unfortunately, the bacon was lukewarm and just not that interesting. It was crispy, but it greasily dissolved when I bit into it. There was more of a charred flavor here, which isn’t bad—in my notes I wrote that it felt “authentic—but overall it was disappointing.”

Checkers was the only restaurant on this list that seemed to use bacon that hadn’t been pre-cooked. Theirs curled and twisted, with crispy parts and fatty parts, the way bacon one cooks on the stove is. It came hot on the burger, though I would have liked it crispier. It wasn’t the best tasting (it kind of reminded me of beef bacon, though I don’t think it is), but, for the price—my Bacon All American Cheeseburger cost $2.29—this was a good deal.

I’m as surprised as you are: The bacon at Dunkin’ Donuts is good. It fills your mouth with athat nice smoky flavor, but not in a cloying or artificial way. Part of what it has going for it, I think, is that they heat the bacon separately, then put it into the breakfast sandwich and toast the whole thing. This way, the bacon both gets a crispy finish and imparts its flavor onto to the sandwich. In breakfast sandwiches, as in life, it’s the little things that make all the difference.

Owing to a (bad) childhood McNugget incident, I do not have a ton of experience with McDonald’s, beyond itsthe desserts. When I think of their food, I imagine grey burgers with buns dyed bright green from pickles. So I was pleasantly surprised when I sampled the bacon in my McGriddle. It was hot and crispy, like bacon should be. It wasn’t delicious—again, nothing on this list tops even the most average grocery store bacon—but it was about as good as I found.

Shake Shack’s bacon was easily the best. It was thicker than the others, and had a nice combination of salty, smoky, and sweet. The edges were crispy, and there were  strips of fat throughout. It wasn’t coated in grease, nor did it seem like it had just been reheated in the microwave. There was nothing particularly revelatory about it, but that doesn’t matter: It tasted like a good piece of bacon, and that’s enough. I don’t feel cool for championing the Facebook of burger chains, but, at least in the case of their bacon, the success seems deserved.