This Secret McDonald's Menu Item Is an Abomination 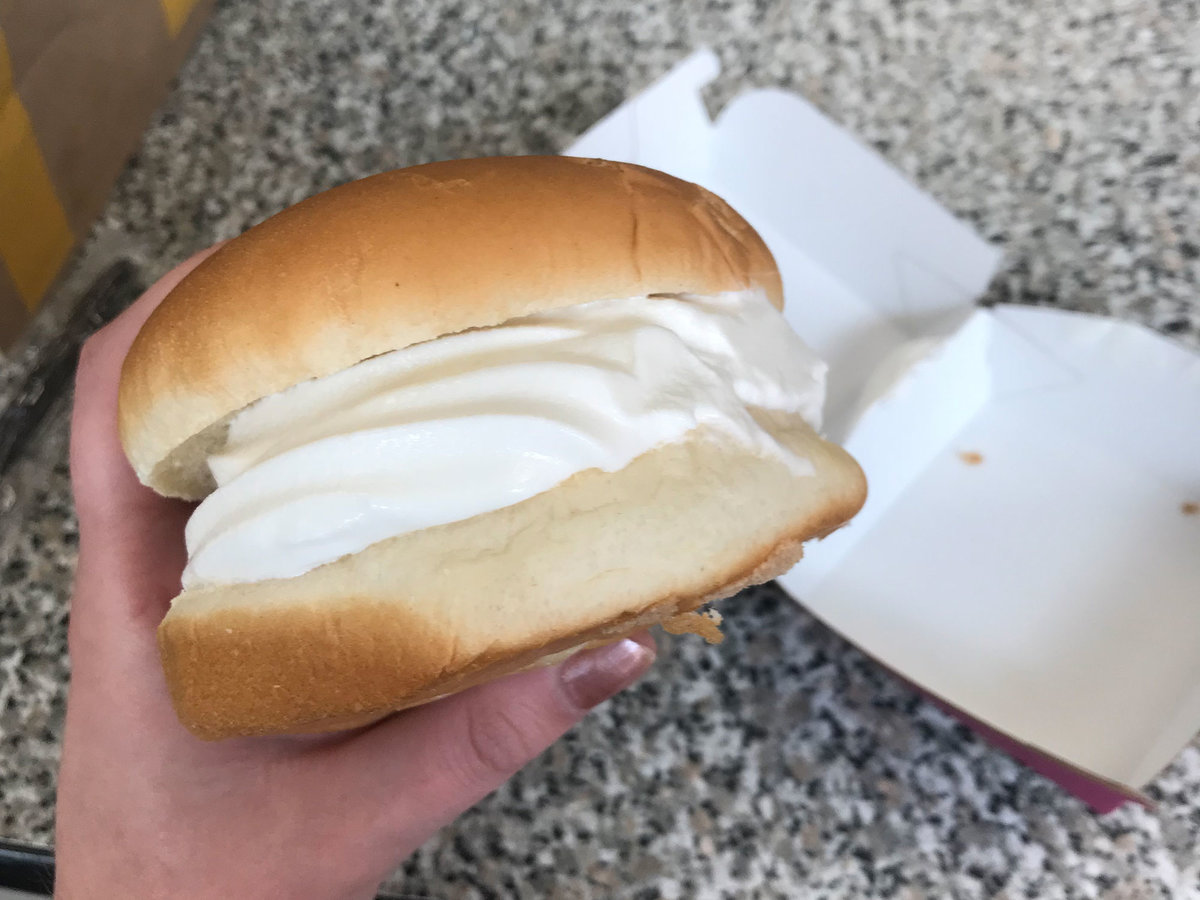 The concept of the “secret menu” is a head-scratcher. Why would big chains have secret menu items? Do customers create them (much to the horror of employees), or is it actually “secret” among staff? Well, one thing’s for sure: Not all menu secrets are ones you’d want to eat IRL. That’s the case with the latest McDonald’s secret item—although it’s certainly an interesting one.

We all drooled earlier this month over the brioche con gelato, which Mark Ladner of Pasta Flyer made for Questlove last month. I could get down with that: a fried brioche bun with strawberry jam, chocolate, strawberry, and vanilla gelato.

But over the weekend, its trash cousin went a little viral. A tweet by an account called Secret McDonald’s Account started circulating the internet featuring, well, ice cream on a bun. As in, plain vanilla soft-serve on a plain McDonald’s bun. And while some secret menu items have snappy names, the account just captioned the tweet “ice cream, on bun.”

Obviously, the Twitter account isn’t official, considering it’s recently tweeted “secrets” like the “uncooked double quarter pounder with cheese” and the “medium glove with Juul on English muffin.” But the ice-cream-on-bun tweet got traction, and I couldn’t help but wonder—even though this clearly isn’t a hallowed psalm chanted in devoted whispers among McDonald’s employees across the lands, would a McDonald’s employee make it for me? Is it real? After all, the person who tweeted it managed to do it, for some godforsaken reason I’ll never fathom. But even if I’ll never find the reason why, I might as well try the thing, right?

So I went straight into a McDonald’s in Manhattan’s Hell’s Kitchen and embarrassed the hell out of myself.

Waiting awkwardly in the McDonald’s line, a businessman who clearly had more important things to do than order lunch at McDonald’s grunted at me to go ahead of him in a manner that was less kind and more “get on with it.” I shuffled past him and ordered a meal—I figured if I was going to ask for nonsense, I might as well provide my unadulterated patronage—before sheepishly asking if I could have ice cream on a bun.

And so it went. Eventually, everyone suspiciously acknowledged that I was actually asking for plain vanilla ice cream on a McDonald’s bun, and the first cashier kindly made me feel less insane by saying it was the “highlight of his day” before ringing me up for a “special request.” (I distinctly heard the businessman mumble “That’s bizarre” before abruptly turning on his heel and leaving the establishment.)

And so I was handed ice cream, on a bun, in a chicken nugget container. I carried my shameful secret up the stairs to nab a table and marvel at it.

There was something so sweetly simple yet sad about it, like an off-brand baby doll at a yard sale. It occurred to me that if I kept trying to define it—and avoiding taking a bite, considering it had already grabbed the attention of several slightly disturbed McDonald’s patrons/unsuspecting witnesses—it would melt and turn into sponge, making the entire scene truly melancholic.

So I took a bite. The ice cream squished out of the sides of the stiff bun, and I instantly thought of a foam mattress topped with heavy cream, an image that I immediately wanted to Eternal-Sunshine-of-the-Spotless-Mind from my head.

Overall, it wasn’t the worst thing I’ve ever had, but I was reminded of an important lesson that we’ve all learned from the internet and from general life in 2018: Just because you can doesn’t mean you should. But most importantly, I’ve learned that McDonald’s employees deal with a whole lot of shit, and we don’t deserve them.