Waking Up to the Scent of Curry in South Africa 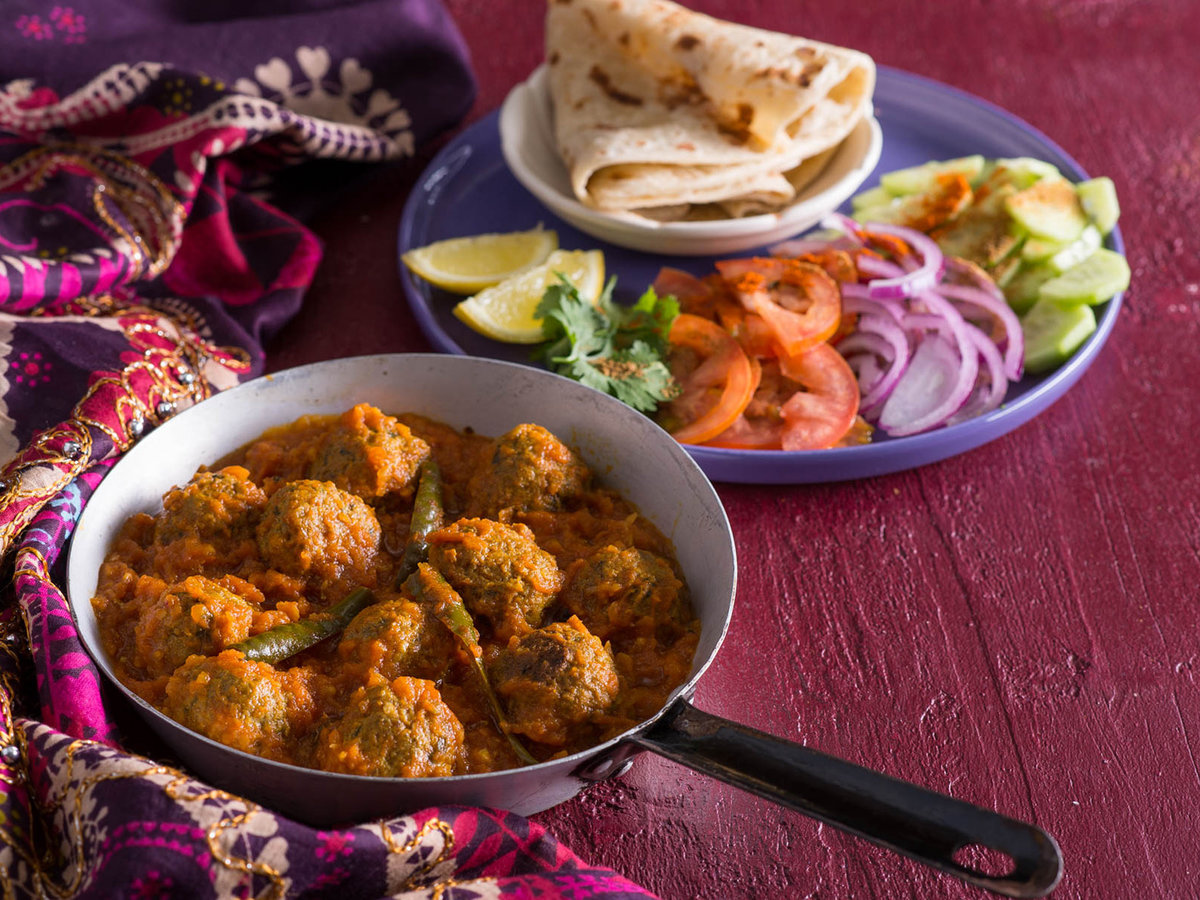 It’s often said that there’s nothing like the smell of bacon frying in the morning. That’s true, in part. South Africans like me were also accustomed to the grand British fry-up thanks to our colonial past. But consider if you will, the pleasure of waking late on a Saturday to the aroma of lamb chops that have been slathered in a salve of hot masala and freshly pounded ginger and garlic, sizzling in a pan. Curry leaves crackle on contact with the fat, scatter a trail of herbal perfume down the passage and into my bedroom. Once browned and cooked through, the chops scoot over into a saucepan of softened chopped tomatoes that simmer with the tiniest of bubbles—plop plop—cooked with thinly sliced onions, slit green chilies, slivers of garlic and curry powder until thick and aromatic. The two fuse to become “chops chutney,” a beloved breakfast curry dish served on some weekends when were kids. A thick fringe of cilantro on the stem, wilting over the steam, was mandatory.

Curry for breakfast is not a novel concept. We know that Asian, African, and Middle Eastern folks are accustomed to savory morning meals that venture beyond the pale of Western bacon and eggs, as good as they may be. Think of more mainstream dishes like congee served with amber to licorice-hued pidan (thousand-year-eggs), Turkish-style poached eggs in garlicky yogurt, Southern African phutu (stiff maize meal porridge), and steamed rice-flour idlis dipped in spicy sambar. From all corners of the Indian subcontinent and Asia, to immigrant communities dishing up their home foods the world-over, curry—or some form of it—makes a daily appearance at the kitchen table, work canteen, or hotel breakfast buffet.

Another weekend curry dish I recall is chops chutney’s somewhat lazier cousin, egg chutney, which is prepared in a similar tomato sauce imbued with onion, garlic, chili, and curry leaves. Eggs, pre-boiled and halved or poached in the sauce like you would shakshuka, simmer and lap up the curry spices as if by osmosis. Fresh potato curry and hot rotis, leftover chicken, or lamb curry shredded into a sandwich and toasted, sour porridge with curried tinned pilchards—these are other curry breakfasts I remember fondly.

Just the memory of the scent of curry sets my olfactory bulb off, sending urgent, gleeful pings along my neural pathways, taking me right back to our kitchen in a house at the bottom of a steep road. I think of my family who live in KwaZulu-Natal on South Africa’s east coast along with roughly 800,000 descendants of the Indian indentured laborers who arrived from around 1860.

On weekdays, ready for school in our neatly-pressed uniforms at the kitchen table, we reverted to Western-style breakfasts of cereal and milk, a pile of toast with butter and apricot jelly, rooibos tea and mugs of sweet Milo. I was always fascinated and secretly envious when classmates mentioned eating dhal and rice or chicken curry and atchar—by hand, of course—earlier that morning. Some lived with older family members like grandmothers and aunts where corn flakes and Coco Pops, or peanut butter and jelly had no place in a cupboard filled with dried lentils, beans, chickpea flour, milk powder, and rice.

The further we moved from the ’70s and ’80s, the more our breakfasts came to replicate an American standard: sweet, processed, lacking in the rich culinary heritage of our forebears. When I look back now, adopting a breakfast that you could pin to a popular TV commercial, like Toucan Sam with his mesmerizing rainbow of Fruit Loops or Tony the Tiger’s crunchy Frosties, was a way of assimilating to the minority-run, white supremacist culture in South Africa that we grew up in.

The cereal we picked out once a month on grocery-shopping runs with my father was also a way of expressing an identity as kids of a multi-generational diaspora, testing out the robes of visibility. Who were we and what did we appear like to the world: Frosties Tuesdays or Egg Chutney Sundays? In many instances, we found ourselves, strangely, as both.

In my home today, we’re more likely to have a berry-rich protein smoothie, Middle-Eastern-style eggs or French toast than the curries I love, so I reached out to friends and fellow food writers with a similar background on Facebook and Twitter, to check in with them on their comparative experiences. For Indians on the continent, particularly in South India, curries and savories are par for the course. Natalie Govender (no relation), who grew up in Cape Town, said: “As a child I used to wake up at 7 a.m. on Sunday mornings and eat chicken curry and rice. It was my thing. Also curry snackwiches (toasted sandwiches).”

Leonard Solai from KwaZulu-Natal added: “Nothing like egg chutney for breakfast. Curry is the best remedy after heavy night.” It’s hard to argue with that, particularly a spicy, dry lamb kheema (ground mince, curried) on toast, followed by a salted lassi.

As we reclaim our culinary heritage—particularly those of us who grew up with “stinky” foods, like my American-Filipino friend Joseph Hernandez who writes so movingly about his childhood as an immigrant—the foods we once shunned are gaining favor at our own tables.

I find it encouraging to think that around 4500-years-ago in the Indus valley, a region where scientist Arunima Kashyap established that pottery shards revealed traces of turmeric, garlic, ginger, eggplant, lentils, rice, and even chicken, my ancestors were enjoying the first proto-curry. Curry and rice, possibly eaten as the first meal of the day. And it probably smelled like home.