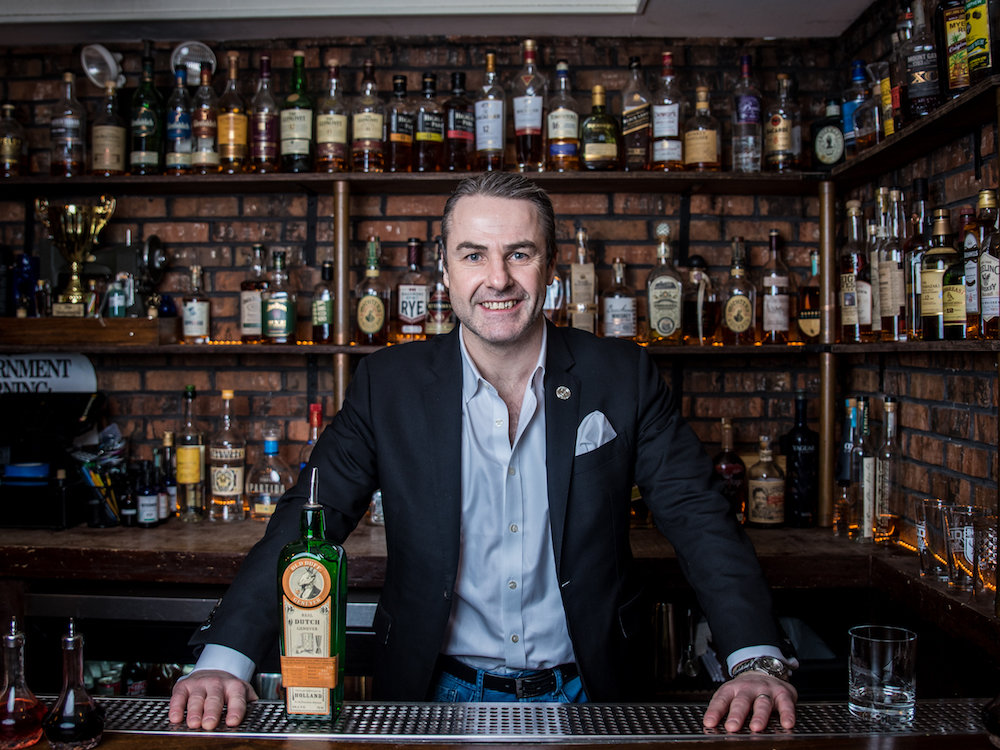 Move aside, George Clooney. While it’s becoming ever more fashionable for celebrities to foray into booze (see: Clooney’s Casamigos, Bob Dylan’s Heaven’s Door, Jon Bon Jovi’s Diving Into Hampton Water), no amount of star power can supplant years of behind-the-bar cred. These days, the best stuff on the market is being made by bartenders.

It’s worth pointing out that, thanks to the Cocktail Revolution, bartending has evolved significantly in the past few decades. While providing good hospitality remains the core of the gig, most bartenders today aren’t just pouring pints and passing shots—they’re curating beverage programs for hotels and hospitality groups, creating event and festival menus, and more than ever, working directly with brands in ambassadorship and advocacy roles.

Working with a major brand is one way to learn the ins-and-outs of the game, from sales to distribution and marketing—those beyond-the-bar skills that even the most skilled drink slinger will need to launch his or her own product. Maintaining the integrity of the brand from start to finish and keeping the audience (read: peers) in mind, however, are areas where bartenders excel best.

“A real craft spirit can’t compete with brands that have any budget, let alone big budgets,” explains Philip Duff, above, a former brand ambassador who created Old Duff Genever. “The advantage was that I knew distilleries, label designers, bars and liquor stores, and I had a really clear vision of what we wanted to achieve. A brand manager in a big firm trying to create a new brand often allows their vision to “die the death of a thousand cuts” because they’re just not as invested in the brand, and because of company politics.”

It makes sense that many bartenders who’ve traded in their bartending shifts for globe-trotting brand work would take to launching new spirits, liqueurs, and ingredients that are geared towards mixing in cocktails. After all, the quality of a drink depends on its various parts, including fresh juices, housemade syrups, and thoughtfully-crafted booze. And with the rising success of bartender-driven brands and initiatives, it’s likely we’ll be seeing more of this crossover in the near future.

“Bartenders today often have niche audiences through social media, local bar networks and often an international following, so I expect to see more bartender-created spirits,” predicts Simon Ford, the bartender and brand expert behind The 86 Co. “The biggest lesson to be taken from behind the bar is to make sure the spirit is built to be mixed—meaning it has enough flavor and body to stand up in a cocktail while at the same time pushing the flavors of the other ingredients forward. You have to make sure you’re making a spirit that bartenders can use to create their menus.”

Here are some of the best spirits, liqueurs, and cocktail ingredients created by bartenders, for bartenders—and everyone else.

Led by Simon Ford—award-winning bartender, former brand expert for Pernod Ricard, and international ambassador for Plymouth Gin—the 86 Co. crafts spirits explicitly created with bartenders in mind. Launched in 2013 by Ford and fellow industry veterans Jason Kosmas and Dushan Zaric, the company’s portfolio includes a vodka, rum, gin, and tequila—each created in collaboration with acclaimed distillers in each respective category. And then there’s the ergonomic bottle, designed by bartenders and plastered with informative labels detailing each spirit’s makeup and production process.

Okay, we take back some of what we said about celebrities. While it’s true that actor Ryan Reynolds has purchased a stake in Aviation Gin, becoming the brand’s new owner and director, distiller Christian Krogstad initially collaborated with acclaimed bartender Ryan Magarian back in 2006 to create the cocktail-centric spirit. The flagship release of Portland’s House Spirits Distillery, Aviation helped pioneer the American dry style of gin—eschewing the heady juniper-forward style and amping up both traditional and new botanicals like lavender, cardamom, and Indian sarsaparilla. Use the stuff in a wholly American martini, or shake it up in a floral gimlet.

Jim Meehan rose to global bar fame in 2007 when he opened PDT, the behind-the-phone-booth speakeasy located in New York’s East Village. In 2012, Meehan joined Banks Rum—named after 18th-century British botanist Sir Joseph Banks—as a consultant and brand face. Sold to Bacardí in 2015, the flagship Banks 5 rum combines juice sourced from five different rum-producing island nations: Trinidad, Jamaica, Barbados, Guyana, and Indonesia (Java). This quintet of cane-distilling traditions—and its resulting balance of funk, spice, and sweetness—has earned Banks primo placement at countless cocktail bars. Splash it into your shaker for a classic daiquiri or build it up in a Collins glass for an Eastside Rickey.

You know you're at home when the decorations in the bar match the cocktails. Thanks to our friends at @grandpubar for this electric addition to our Five Island Flamingo serve. . . . #Banks #BanksRums #Banks5IslandBlend #Dusseldorf #MeehansBartendersManual #GrandPuBar #JimMeehan

Cocktail syrups are the key to mellowing the bite of the spirit and soothing the acidity of fresh ingredients, like lemon or lime juice. In the classic canon, bars typically stock at least a simple syrup, fresh ginger syrup and a honey syrup among others. But these days, syrups are becoming as experimental and specialized as the rest of the ingredients in the glass. Enter Cocktail & Sons, a line of creative, all-natural, and handcrafted cocktail syrups conceived by the husband-wife duo of award-winning New Orleans-based bartender Max Messier and bar consultant Lauren Myerscough. Options include mint and lemon verbena, honeysuckle and peppercorn, oleo saccharum, and a spiced demerara syrup.

If your dirty martini uses primo vodka and vermouth but low-grade olive brine that’s been sitting out all night, what’s the point? While tending bar at Jones Hollywood, Eric “ET” Tecosky have an epiphany moment: a need for high-quality, bottled olive juice meant for cocktails. Making the jump to brand founder in 2005 with the launch of Dirty Sue, Tecosky ran the business out of his apartment for four years until the company was big enough to fulfill online orders. “It wasn’t always sunshine and rainbows,” Tecosky recalls. “Very few olive farms have that much juice. It took several tries to find the right supplier.” Now a bona fide bar staple, Dirty Sue offers a range of twice-filtered brines sourced from Spain’s olive-producing Sevilla region along with olive garnishes hand-stuffed with fillings like garlic, blue cheese, and jalapeño.

Sometimes, bartenders don’t just put out their own riff on an existing category of spirit or liqueur—they create new ones. Amalfi Coast-born bartender Giuseppe Gallo, who also served as a brand ambassador for Martini & Rosso vermouth, set out to revive a long-lost style of Italian rose petal liqueur known as rosolio. Drawing from memories of his coastal Italian childhood, he’s amped up the traditional recipe with the addition of bergamot oranges sourced from the UNESCO-protected region of Calabria. Watch out, Aperol: the Italicus has all the potential to make a dent in the aperitivo category—it plays excellently in spritzes, high-balls, and other effervescent simple-serves,

There are not many female entrepreneurs on this list, which is unfortunate considering the fact that many of the industry’s most influential bar owners, brand ambassadors, and bartenders are women. One-time bartender and brand specialist Effie Panagopoulos became the first Greek woman to launch a liquor brand with Kleos—a super-premium version of the age-old spirit made from the sap of Mastic trees indigenous to the island of Chios—produced in collaboration with Greece’s first known female distiller, Maroussa Tsachaki. Panagopoulos says she believes the sweet liqueur, which balances warm spices with fresh vegetal notes, has the potential to become “the bartenders’ olive oil” and spotlight Greek cocktails. We love it in a highball, or in place of recipes that call for sweet liqueurs like St Germain.

Philip Duff is a world-renowned bar consultant educator, founder of the beloved Door 74 bar in Amsterdam, and erstwhile “chief genever officer” at Bols Genever. Finding his passion in genever—the malty, multi-grain Dutch predecessor to modern-day gin that reigned supreme in the 19th century Golden Age of cocktails—Duff took the plunge to kickstart his own brand of the stuff. Released in the US in 2017, his titular Old Duff is headquartered in the historic genever-making city of Schiedam, Holland. The flagship genever employs a base od two-thirds rye grain and one-third malted barley, which is fermented for five days, triple pot-stilled, and blended with a neutral wheat distillate plus juniper, lemon and orange peel, star anise, licorice, and coriander. Another expression, the Single Malt 100% Maltwine, distills the same grain base but with only juniper and Bramling hops. Try your hand at a genever cocktail.

Though it’s been enjoyed for nearly four centuries, milk punch is still relatively obscure in the mainstream cocktail conversation. Eamon Rockey, a graduate of the Culinary Institute of America and former bartender at Eleven Madison Park, is changing that with his namesake take on the flavorful, silky drink. Milk punch is typically made in a labor-intensive process that involves clarifying a mix of spirit, milk, sugar, and citrus, then straining off the curds with a cheesecloth to yield a crystal-clear liquid. In Rockey’s version, a milk punch base (sans spirit) is bottled, allowing bartenders and guest to mix it up with their choice of spirit. Serve up your milk punch cocktail as is with a dusting of nutmeg, or top it off with champagne for a sparkling twist.