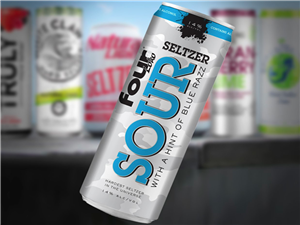 The summer of spiked seltzer shows no signs of slowing down. Earlier this week, Natty Light announced its entry into what the Wall Street Journal says is a $500 million-plus spiked seltzer market. PBR is too, upping the ante with an 8% ABV option. Everyone wants a piece of the action.

So it was perhaps inevitable that one particular alcoholic beverage brand with a reputation for debauchery and excess would enter the fray. I’m speaking, of course, about Four Loko, the energy beer that caused the drinking world to lose its collective mind at the beginning of the 2010’s.

A tweet from the brand this week suggests that they’ll be releasing the “hardest seltzer in the universe,” saying that hard seltzers like White Claw, Truly, and even the as-of-yet unreleased Natural Light Hard Seltzer visible in the image’s background “ran so we could fly.”

Given that the OG formulation of Four Loko was so potent that current Senate Minority Leader Chuck Schumer had to step in to get it banned, one would be right to assume that Four Loko’s take on spiked seltzer all but carries 2019’s trendiest alcoholic beverage category to its logical conclusion. While Four Loko won’t be circumventing FDA policy to reintroduce caffeine, they are upping the ante by formulating a spiked seltzer that weighs in at an astounding 14% ABV. That’s right: a 28 proof offering that upends the perfect balance of hydration and celebration that everyone’s favorite combination of carbonated water and questionably-sourced alcohol is known for.

If it reaches production, Four Loko would be the literal strongest beverage in the spiked seltzer category by a significant margin. Most current offerings like White Claw and Truly clock in at 5% ABV. Natural Light’s recently-announced upped their alcohol content to 6%, and PBR’s “Stronger Seltzer” raised the stakes to 8%. All of them now look downright weak in the wake of Four Loko’s announcement.

As you might expect, reaction to this latest salvo in the spiked seltzer wars was greeted with a mixture of excitement and fear on Twitter.

Is this even real? Is it fit for human consumption? So far, all we have to work with is a tweet that teases a sour seltzer “with a hint of blue razz.” But the countdown to the moment that spiked seltzer is declared some kind of public health emergency has officially begun.