Home » Cocktails » How to Use Shiso Leaf for Fresh, Fragrant Cocktails

How to Use Shiso Leaf for Fresh, Fragrant Cocktails 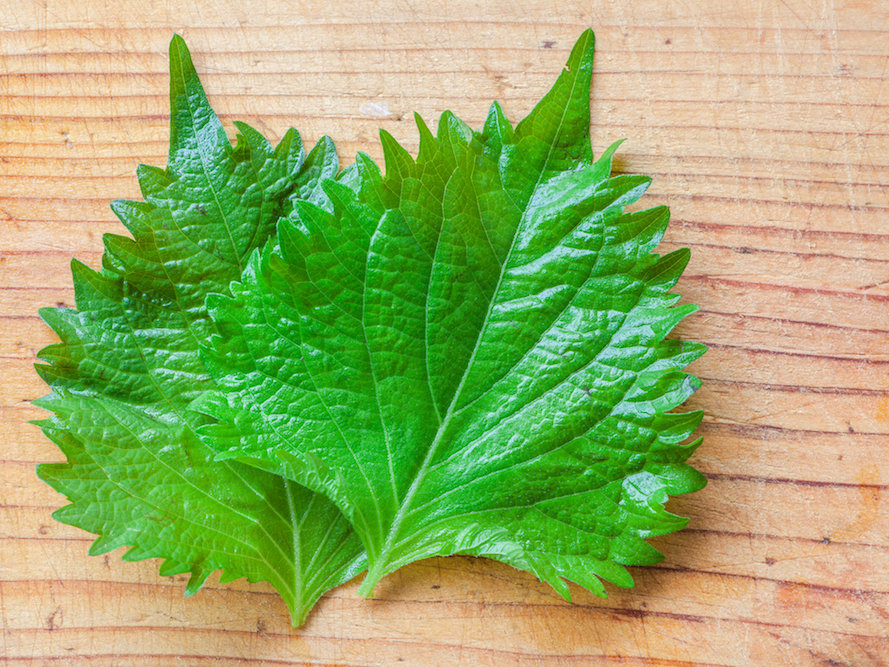 It’s hard to describe the taste of shiso, the fragrant and addictive herb you might have seen decorating a sushi platter, or elsewhere in Japanese, Korean, and Southeast Asian cuisines. As distinctive in appearance (flat leaves with jagged edges) as it is in flavor, its unmistakable character makes it a perfect candidate for cocktails—whether complementing the herbaceous qualities of gin, or adding herbal nuance to a classic highball.

Look for shiso in Asian markets with a good produce selection, or some higher-end grocery stores. There are both pure green and purple-tinged varieties; here, we’re using the latter.

A great garnish can transform an entire drink — when you do it right. Here, we’re making a totally classic gin martini (with our preferred ratio: two ounces of gin to one ounce of good vermouth). And all we’re doing is adding shiso leaf as a garnish.

Here’s the key to working with herb garnishes: Take the shiso leaf (or mint, or basil) in one palm. Then give it a good slap, with the other. This breaks up some of the plant cells and releases their aromatics. Try a little experiment yourself: Take an herb, give it a whiff, give it a whack, and sniff again. The aroma will be much stronger.

So a single shiso leaf can change your experience of a great martini, playing well with the gin’s herbal elements. It’s subtle, but it’s there.

Instructions: In a mixing glass with ice, combine two ounces of gin and an ounce of dry vermouth. Stir until well-chilled, then strain into a chilled cocktail glass. Garnish with a shiso leaf, first clapped between your palms to release its aroma.

Shiso has such a distinctive flavor, we don’t want to mask it too much. And when we want some other ingredient to shine, not the spirit itself, that’s when we reach for the vodka. Add some lemon and sugar to balance it out, and you’ve got a vibrant drink whose flavor is all shiso. Be careful; despite two full ounces of spirit,  this one goes down way too easy.

Instructions: In a cocktail shaker with ice, combine two ounces of vodka, an ounce of fresh lemon juice, and 3/4 ounce simple syrup, as well as 5 shiso leaves. Shake up until well-chilled, then double-strain (through a fine mesh strainer, as well as through the shaker’s own strainer) into a chilled cocktail glass. Garnish with a shiso leaf, first clapped between your palms to release its aroma.

In Japan, the whiskey highball is an art form. And when we thought about working shiso into a highball, we realized there was already a model for an herbal highball: It’s called the mojito. Shake up shiso leaves, instead of mint, with Japanese whiskey and lime, add soda, and you’ve got a cocktail as nuanced as it is utterly drinkable. (As always, don’t skimp on the garnish.)

Instructions: In a cocktail shaker with ice, combine an ounce and a half of Japanese whiskey, an ounce of fresh lime juice, and 3/4 ounce simple syrup, as well as 8 shiso leaves. Shake up until well-chilled, then double-strain (through a fine mesh strainer, as well as through the shaker’s own strainer) into a tall glass over fresh ice. Add two ounces of club soda and give a quick stir. Garnish with several fanned-out shiso leaves, first clapped between your palms to release their aroma, and a straw.