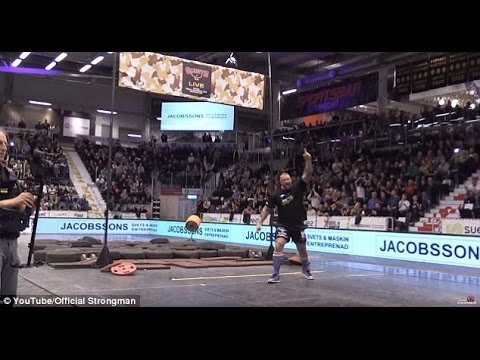 ‘Game of Thrones’ is known for its gruesome, bloody fight scenes and few have been more difficult to watch than those perpetrated by The Mountain. The hulking juggernaut of a man is most famous for (spoiler alert) crushing the head of Oberyn Martell like an over-ripe cantaloupe among other unspeakable acts.

The menacing role had previously been held by a couple of actors in the first two seasons, but The Mountain (aka Gregor Clegane) finally hit his earth-trembling stride in the fourth and fifth seasons of the series when the part went to professional strongman and Icelandic giant Hafthór Júlíus Björnsson. The six-foot-nine-inch tall actor weighs in at nearly 400 pounds and has won the title of Europe’s Strongest Man two years running (in those competitions that air at 2:37 AM on ESPN 2 and involve huge men pulling airplanes).

In addition to manual airplane moving, another staple of those competitions is the keg toss, and Björnsson’s recent attempt was part of the qualifying rounds for the next World’s Strongest Man contest in Malaysia. The event video shows Bjornsson hurling a 33 pound keg over 24 feet into the air. The world record setting toss bested a previous record which was also held by Björnsson. Not to show up The Mountain, but I did just perfectly sink a half-empty can of Diet Coke into the office recycle bin. Beat that, Björnsson.