Home » Cocktails » What Is Limoncello and How Is It Made?

What Is Limoncello and How Is It Made? 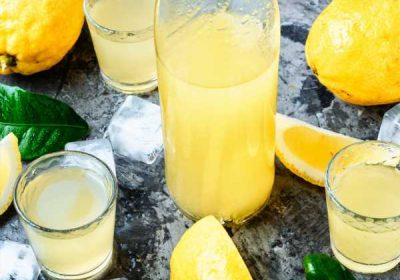 The second most popular Italian liqueur (after Campari), limoncello is almost as rich in history as it is in flavor. But just how did the bright and sunny apéritif come to be—and how is it made today?

Limoncello is an Italian liqueur made from lemon zest. It’s mainly produced in Southern Italy, particularly in Sorrento, Capri, and along the Amalfi Coast. Traditionally, limoncello is made with Femminello St. Teresa lemons, a vibrant lemon variety native to the Sorrento Peninsula of Italy.

The liqueur is served chilled in small ceramic glasses as an apéritif or digestif (a drink served before or after a meal) to aid in digestion.

Limoncello is made by steeping lemon zest (peels) in highly concentrated ethanol or vodka until oil is released, then mixing the resulting yellow liquid with simple syrup. Its alcohol content varies—especially among homemade varieties—but is usually measured somewhere in the 25-30% range.

Depending on who you ask, limoncello’s roots can be traced back to Sorrento, Amalfi, or Capri. This topic is actually a point of great contention among limoncello producers, and origin stories involve everyone from fishermen in the Middle Ages to thirsty monks.

According to Federvini, the Italian Association of Wine/Liqueur Producers, however, the yellow liqueur was born in Capri about a century ago. According to Federvini, a local woman named Maria Antonia Farace was known for her garden of lemons and oranges. After World War II, her grandson opened a restaurant that specialized in his nonna’s lemon liqueur.

Her great grandson, Massimo Canale, registered the trademark and began producing and marketing the drink around the world.

It’s pretty easy, if not a bit time consuming, to make limoncello in your very own kitchen—get our recipe here.

The lemon-based liquor is also a popular ingredient in cocktails, as it has a strong lemon flavor without the sharpness of pure lemon juice. Check out a few of our favorite limoncello cocktails: