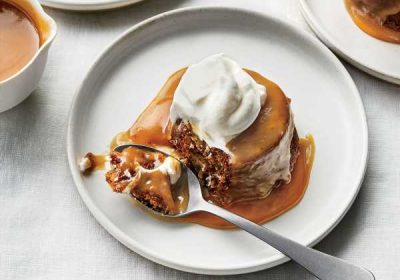 There are a few desserts I never pass up if they appear on a menu, and anything beginning with “sticky toffee” in the name has always fallen firmly in that category. Specifically, sticky toffee cake (or pudding, as it’s often called) is my kryptonite. The allure of warm toffee poured over date-enhanced sponge cake and served with vanilla custard or cream is too strong for my willpower to resist and far too satisfying to deny.

What accounts for my fascination? A little digging suggests that the dessert made famous by British chef Francis Coulson at the Sharrow Bay hotel may in fact be Canadian in origin—which would explain my penchant for it given that I, too, am Canadian. The story goes that the dessert was initially made by Patricia Martin at her country hotel in Claughton, England, and later appeared as her contribution to a compilation of recipes published in 1971. Reports differ as to whether she learned the recipe from a Canadian friend or from two Canadian air force officers who stayed at her hotel.

But I would love sticky toffee cake no matter where it originated. When the weather turns colder and I start planning for the holidays ahead, this spoonable sweet is everything I need in the dessert department. It’s easy to make for a crowd and undeniably decadent.

I’ve recently taken to putting my own touches on the classic, giving the otherwise sweet and soft-textured dessert more dimension and depth. In addition to the traditional dates, I like to add chopped pears to the batter, where they cook down as the individual cakes bake, and I add miso to the toffee, which lends a salty savoriness that may sound gratuitous but exceeds expectations. My recipe serves 12, but you’ll be wishing you’d made a whole lot more.

Preheat oven to 350°F. Grease a 12-cup muffin tin with softened butter, and dust with flour; set aside. Stir together dates and 1 cup water in a small saucepan. Bring to a boil over medium; cook, stirring occasionally, until dates are softened and liquid is mostly absorbed, about 5 minutes. Remove from heat, and let cool 5 minutes. Using a potato masher or fork, mash mixture until mostly smooth; set aside.

Stir together flour, cinnamon, baking powder, baking soda, and salt in a bowl; set aside. Place brown sugar and butter in bowl of a stand mixer fitted with the paddle attachment; beat on medium-high speed until light and fluffy, 4 to 5 minutes. Add eggs, 1 at a time, beating well after each addition. With mixer running on low speed, gradually add flour mixture, beating until just combined, 1 to 2 minutes, stopping to scrape down sides of bowl as needed. Stir in date mixture. Fold in pear pieces.

Spoon batter evenly into prepared muffin tin, filling each cup about 1/3 inch from top (about 1/3 cup each). (Discard any remaining batter, or reserve for another use.) Bake in preheated oven until a wooden pick inserted in centers of cakes comes out clean, 18 to 22 minutes.

Melt butter in a medium saucepan over medium-low. Add brown sugar and miso; whisk until dissolved, 1 to 2 minutes. Whisk in heavy cream. Let mixture come to a boil; cook, whisking constantly, 1 minute. Remove from heat; set aside until ready to use.

Once cakes are finished baking, remove from oven; immediately poke holes all over cakes with a wooden pick. Spoon about 1 tablespoon miso-caramel sauce over each cake. Let cakes cool in muffin tin 20 minutes, occasionally poking additional holes to help sauce soak in.

Beat heavy cream in bowl of a stand mixer fitted with the whisk attachment on medium-high speed until soft peaks form, 1 to 2 minutes.

Run a small offset spatula around each cake to help loosen from muffin tin. Invert cakes onto individual serving plates; top each with about 1 1/2 tablespoons miso-caramel sauce. Serve with whipped cream and remaining miso-caramel sauce.