3 Tiny Tricks for Better Lemonade (That Don’t Cost Anything!) 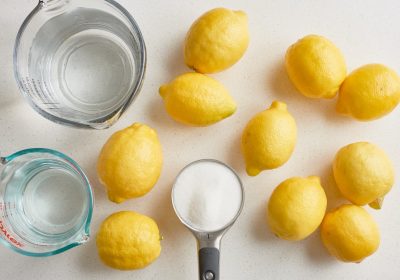 Even though we’re only a few days past the official start of summer, these hot temperatures have a way of making us feel like it’s been summer for a while now. Luckily, we also have our beverage of choice when it comes to cooling down: lemonade.

The drink is an immediate classic — and rightfully so. Even on its own, with just freshly squeezed lemons, water, a bit of sweetener, and plenty of ice, lemonade never disappoints. That said, we’re big fans of upgrading just about everything if it makes sense to, and lemonade is no exception. Best of all with this drink? All of its upgrades are ones many of us can do without an extra trip to the grocery store (read: They cost $0!).

So from small-but-important shifts in preparation, to an often-overlooked ingredient (already in your kitchen!) that makes the whole thing taste even better, here are three tried-and-true ways to improve your next glass this season.

1. To extract the most flavor, use a stand mixer to juice the lemons.

By ditching the default hand juicer for a stand mixer, you’ll not only save time and manual effort, but you’ll also extract a better end product. That’s because in addition to the stand mixer’s paddle beating out the juice, it’ll also pull out the lemon oils. You’ll then end up with a base mixture that tastes even more vibrant and sunny than if it were just the juice alone. (This same trick also works for limes and margaritas!)

Read more: How to Juice Lemons with a Stand Mixer

2. For naturally sweeter lemonade, roast lemons in the oven first.

With lemonade, we’re often used to adding sweetener at the end. But this smart trick — where you’ll roast halved lemons in the oven for about 20 minutes — will slowly draw out the natural sweetness of the lemons, while also toning down their tartness. Once the lemons cool back down, you’re left with a rich, subtly sweet flavor that’s ready for juicing. And depending on your taste, you might not need to add the full amount of sweetener later — or even any at all.

Read more: How to Oven-Roast Lemons for Lemonade

3. Add a pinch of salt to elevate overall flavors.

It may sound counterintuitive here, but just like how adding a pinch of salt makes just about anything better — from chocolate chip cookies to overly-sour grapefruits — the same is true when you add a bit of it to lemonade or other citrus-based drinks. Salt will make the citrus taste more vibrant, yet less acidic. It’ll also balance out your sweetener of choice. But remember that a little goes a long way! You don’t need much; just a pinch is perfect.

Recipe: Maple Limeade (with a pinch of salt)

What’s your favorite way to make lemonade? Let us know in the comments.