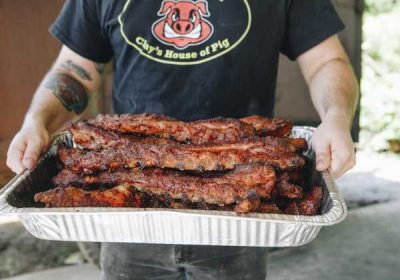 It’s National Barbecue Month; Memorial Day is nearly upon us; and we’re all still (mostly) stuck at home. There’s no better time to fire up your gas or charcoal grill, smoker or pellet grill and start churning out meat that will taste as good as what you’re used to at your favorite barbecue joint. But first, glean a few tips from the experts—a powerhouse quintet of pitmasters from around the South who’ll help you be on your way to making some of the best pork, chicken, beef and turkey you’ve ever tasted.

Great cooking comes down to confidence

John Lewis, owner of Lewis Barbecue in Charleston, S.C., is serious about meat. He’s welded his owned custom-designed smokers and regularly wakes up before dawn to tend the fires for his expertly smoked pork spareribs, beef ribs and brisket, making thousands of pounds of barbecue for his hungry fans each week. But for those of us not on Lewis’s level, it’s OK to start small. He recommends mastering the smoked pork butt first—a forgiving cut of meat that’s hard to mess up. “Let’s be honest: We have enough stress in life right now, and overcooked meat should not be one of them,” he says.

WATCH: How to Turn Your Grill Into a Smoker

–   Start with a quality product. “Invest in premium meat and you won’t have to do much besides cook it properly to make it taste good,” says Lewis. Buddy up to your local butcher or head to Costco or Sam’s Club and splurge on the premium cuts—it makes a big difference.

–   Use a good rub mix. You can buy the exact rub that Lewis Barbecue uses online, or make your own. The key is to make sure you have enough salt, heat, and sweet to balance out the flavors, says Lewis. And use lots of it, too—you should liberally apply the rub all over the meat because it’s going to cook for a long time, he adds.

–   Create an offset smoker on your grill. Do this by firing up just one side (Lewis recommends using charcoal or wood chips if you have them) and then placing the meat on the “cool” side of the grill. This will help regulate the temperature and allow for the smoke to cook the meat instead of the flame.

–   Be patient. “The most common mistake I see is [home grillers] slicing the meat right after it’s pulled off the grill,” says Lewis. “You have to let meat rest before cutting into it, or you’ll lose all that juice and flavor you worked so hard on cultivating.”

Siblings Howard Hsu and Anita Hsu opened Sweet Auburn BBQ in Atlanta, inspired by their Malaysian-Chinese roots. What started as a mobile trailer has expanded to encompass multiple food trucks, a food stall at Sweet Auburn Curb Market and a brick-and-mortar spot in the Poncey-Highland neighborhood. It’s no wonder diners flock here from around the South to get their hands on the restaurant’s tantalizing smoked meats and homemade sides with an Asian twist. Among the crowd-pleasers: the ultimate barbecued chicken.

–   Brine for at least 24 hours. “Brining is a super easy and great way to add extra flavor and texture to chicken,” says Howard. His method: Combine about 1 ¼ cups of kosher salt and ½ cup sugar per gallon of water in a pot and bring to a boil—the sugar helps the meat brown during the cooking process, Howard says. Remove pot from heat and allow it to completely cool. You can add some of your favorite spices and herbs to the brine for added flavor (Howard likes to add six cloves of garlic, five sprigs of thyme, and 1 tablespoon of cracked black peppercorns.) Finally, submerge your chicken into the cooled brining liquid and soak overnight in the fridge, turning once about halfway through. When ready to cook, remove chicken and pat dry.

–   Use low heat. Howard recommends cooking the chicken at 225°F for 1.5 to 2 hours on the grill or smoker. If grilling, make sure to cook the chicken skin-side down so the fat can render toward the skin. “This makes for delicious, crispy skin,” he adds.

–   Test for doneness. If you don’t have a meat thermometer, you can ensure chicken thighs are cooked properly by using a small paring knife to cut into the meat. Look for a slight pink color near the bone and for juices to run clear.

Need a meat thermometer? Our editors tested every brand we could get our hands on in order to find the best.

Low and Slow: The Ultimate Brisket

At the end of 2019, Hutchins BBQ—with locations in both McKinney and Frisco, Texas—launched an e-commerce site making their famous Texas-style brisket, ribs, sausage, seasonings and sauces available for shipping nationwide. Little did they know at the time how rewarding this would be for barbecue-loving fans during Covid-19, who are getting to enjoy Hutchins’ goods from home throughout National Barbecue Month (May) and beyond. Pitmaster Wes Hutchins, one of the three brothers who own and operate the joint, reveals what makes it so good.

–   Buy the right meat. It seems obvious, but worth repeating: Making Hutchins-worthy brisket at home means starting with the best brisket you can buy, says Hutchins. They use USDA Prime, but the top 2/3 of USDA Choice briskets are good options as well if you can't find Prime.

–   Plan ahead. Patience is important when making brisket—Hutchins BBQ wet-ages theirs for 30-45 days. You can replicate this at home by purchasing vacuum-sealed brisket. Then, “let it hang out in its wrapping in your refrigerator for one month before you smoke it,” says Hutchins. This allows for the most concentrated flavor to develop.

–   Slather it in mustard. Before you smoke, add a layer of mustard all over your brisket to help keep your rub in place and create a beautiful bark, says Hutchins.

–   Double up on wood. To achieve the Hutchins signature smokiness, use post oak wood (a classic smoking wood for brisket) for the first 3-5 hours of smoking time. For the remainder of the cook time, use pecan wood.

Go Ahead, Burn Those Ends

Over the last few years, the city of Tupelo, Mississippi, has been quietly transforming into a food-lover’s paradise. Leading the pack of restaurants serving seriously good Southern cuisine—including some top-notch barbecue—is C.H.O.P., or Clay’s House of Pig. It’s named for its pitmaster, Clay Coleman, who got started selling barbecue from his bait-and-tackle shop as a way to bring in more customers. Now it’s become the main reason people come into the shop, known for serving some of the best barbecue in the state—especially those craveable sticky nuggets called burnt ends.

–   Score the pork belly. This is the very first step and secret to making killer burnt ends. You should score the fat side of the pork belly just deep enough to penetrate the fat cap, says Coleman. “This creates more surface area for the rub to attach to—it’ll render more fat, which makes the outside crispier,” he explains. Then, cut the meat into 1- to 1.5-inch cubes (keep in mind, they will shrink when cooked).

–   Don’t skimp on sugar. After adding your desired rub to the cubes, add a heavy coating of white sugar. White sugar, when heated, becomes a sticky crust that helps hold in juice, and makes the end result so delicious.

–   Use indirect heat. Put the bellies on a smoker with indirect heat—an offset smoker, pellet grill or even an electric smoker will do fine, says Coleman, who prefers using pecan wood for the best flavor. (You don’t want to use an open flame, as the drippings can ignite the sugar, cooking the outside to a crisp while leaving the inside undercooked.)

–   But turn it up. Smoke the ends at a higher temperature than you would normally do with slow smoking (around 275 degrees) to let the sugar turn into a caramelized crust on the outside.

–   Hit them with sauce. Right before you pull them off, douse them with your favorite barbecue sauce—this is easiest with a squirt bottle, says Coleman. When you pull them off and put them in a bowl, you can hit them with more sauce, too. “The best burnt ends should be sticky and dripping,” he adds.

Ray Lampe isn’t just a pitmaster, he’s Dr. BBQ—which also happens to be the name of his restaurant in St. Petersburg, Florida. Winning his first trophy for a whole turkey he’d cooked back in 1991, he’s been honing his knack for smoking the perfect bird ever since. “Someone once told me that if you like the purple lure, you’ll fish better with it,” he says. “We have a real passion for turkey and because of that, we treat it with as much love and respect as the brisket, ribs and pork shoulder.” Here’s how to get that made-with-love flavor and coveted juicy texture on the grill.

–   Buy an enhanced turkey. This means that it’s been already brined. Or, you can brine it yourself. Either way, it will ensure you have a juicy turkey, even if you end up slightly overcooking it. Lampe says you can also add flavors to a brine that will be carried deep into the meat.

–   Throw it on ice. On the day you’re planning to cook it, take the turkey out of the fridge and let it sit at room temperature for one hour with a bag of ice on top of the breast. “A challenge to cooking a whole turkey is getting the white meat and dark meat done at the same time,” says Lampe. “This ice bag trick allows the dark meat to warm up just a bit while the breast meat gets very cold before cooking, resulting in an evenly cooked bird.”

–   A little bit of smoke goes a long way. “As pitmasters, we tend to like more smokiness than most of our guests,” says Lampe. When you’re making smoked turkey at home, try a moderate amount of a lighter-flavored smoke, like apple or cherry.

–   Don’t go too low. Lampe advises smoking your turkey at the same temperature as you would cook it in the oven—around 325 degrees. “We typically think of ‘smoking’ food at lower temps, but I find that a turkey develops a bit of a mushy texture when you cook it too slowly,” he notes.

–   Use a good-quality thermometer. Find a reliable instant read thermometer to check the internal temperature of the bird for doneness. “The little pop-up things aren’t very accurate,” Lampe says. You want to check your turkey’s temperature in a few places, aiming to reach 165 degrees in the breast and at least 175 degrees in the thigh.