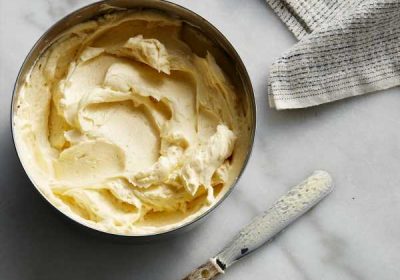 There are some people who don’t like frosting. They prefer their cake with barely sweetened whipped cream, or maybe a drizzle of honey and a dusting of confectioner’s sugar. Those things are well and good, but I would be lying if I told you that I thought they were better than frosting. I grew up on boxed yellow cake slathered with American buttercream and sprinkles for every birthday, and it’s still the thing that tastes the most festive to me, no matter how many other kinds of buttercream I try.

Even though American buttercream typically only has a couple components, chief among them butter and powdered sugar, that doesn’t mean it can’t be an amazing template for all kinds of flavors. It’s great with a little vanilla extract or cocoa powder, for sure. But what about peach or Key lime? The world of frosting is a vast one, and it can do a lot to give a little oomph to even the plainest cake. Try a couple of these.

If you’ve never made brown butter, I’m here to tell you that it’s a thing that’s worth your time. By melting butter and cooking it over low heat until the solids turn brown and smell nutty and delicious, you give even more flavor to butter. This brown butter frosting uses that little trick to give toasty depth to buttercream, which would be particularly nice with a vanilla or spice cake.

Get the Recipe: Brown Butter Frosting

Ginger might not seem like a natural complement for cream cheese—it’s not usually an option at the bagel place. But the spicy notes of the ginger combine with the tang of the cream cheese for a really unusual and delicious frosting, one that would be as nice on carrot cake as it it would be on yellow cupcakes.

Get the Recipe: Ginger-Cream Cheese Frosting

Maybe you’ve heard of Coca-Cola Cake, or some variation on the same theme, in which soda is used to sweeteen a cake and to give the crumb an airy texture. But there’s no reaon you should stop there. Coca-Cola mixed with cocoa also makes a nice frosting for other cakes, particularly a chocolate one.

Get the Recipe: Coca-Cola Frosting

This frosting has all the tang of a key lime pie but made to be smeared on a cake rather than turned into a curd. If you can’t find key limes, using Persian limes—the kind commonly available in the supermarket—will work just as well.

Like the Ginger-Cream Cheese frosting, this one uses the backdrop of a traditional cream cheese based icing—it’s just a matter of putting cream cheese and butter into the bowl with confectionaer’s sugar. Except in this version, you also add a package of sweetened, flaked coconut to round out the whole thing.

Get the Recipe: Coconut-Cream Cheese Frosting

Cream cheese is a pretty standard buttercream ingredient. And maybe you’ve even tried mascarpone. But how about goat cheese? Turns out that the milky tanginess of goat cheese is perfect for frosting, particularly on chocolate and spice cakes. But no one’s going to stop you from adding it to other things too.

Get the Recipe: Goat Cheese Frosting

Fruit is another really good option for adding flavor and color to a standard buttercream. This recipe calles for one fresh pureed whole peach, but there’s no reason you couldn’t do the same thing with strawberries, blackberries, or blueberries, depending on what you have handy. And if nothing is readily accessible or in season, canned peaches will work just fine.

Get the Recipe: Peach Buttercream Frosting