7-Eleven Wants to Delivery You Slurpees All Summer Long 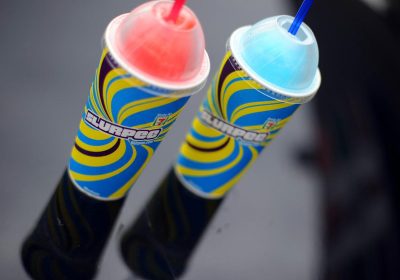 Have you ever felt like convenience stores just aren’t convenient enough? Is the thought of having to physically visit a 7-Eleven location to get your paws on a big gulp simply too much to bear?

Well, lazybones, the company known for handing out free Slurpees every July has a new solution that should be right up your alley. This week, the convenience chain announced it would start delivering to 2,000 specific locations nationwide that it’s choosing to call “7NOW Pins,” named after the 7Now app.

According to Nation’s Restaurant News, it sounds like there will be about 2,000 of these pins to choose from, covering popular public locations like parks, stadiums, and other areas where hungry or thirsty folks tend to congregate. All a customer has to do is place an order, find the nearest pin, and wait there for the Slurpee plug to come through.

As 7-Eleven sees it, adding pins as preset delivery locations is an extension of what their brand is already about. “7NOW Pins makes convenience more convenient, by keeping customers in the moment, whether at a game, in the park or enjoying the sun on the beach,” said Gurmeet Singh, 7-Eleven chief digital, information, and marketing officer, in a statement quoted by Nation’s Restaurant News. “Our customers asked for it and we are delivering.”

Believe it or not, 7-Eleven already delivers through its 7Now app in a smattering of select cities across the country (with more apparently on the way). It’s unclear if the 2,000 pins would be limited to those existing locales, but the company’s press release does mention Venice Beach in Los Angeles (a city listed as “delivering soon”) as a potential pin, for what it’s worth.

In the abstract, the idea kind of makes sense. I’d hazard a guess that more people would be interested in ordering a 7-Eleven delivery while they’re out having a picnic in Central Park than when they’re sitting at home and can access a wider array of options. So with that said, don’t be surprised if there are a lot more people sipping Slurpees on a crowded beach this summer.