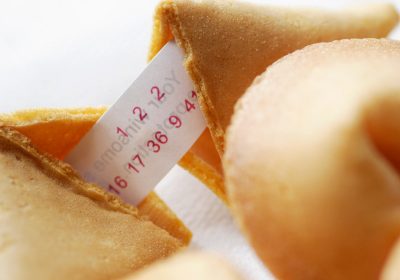 Perhaps the key to winning the lottery has been right under your nose the entire time — and what you’re whiffing is the sweet scent of a fortune cookie. This week, Charles W. Jackson Jr. became the latest winner to claim Powerball’s top prize, and he says he got his numbers from a fortune cookie his granddaughter got at a Vietnamese restaurant.

The 66-year-old retiree from Cumberland County, North Carolina, took a lump sum payout of $233 million. “You play to win, but you don’t ever expect to win,” he said according to WRAL. “I don't know what to do with it. I hope it don't change me a lot…. I'm still going to wear my jeans — maybe newer ones.” He did say he had a deal with his brother that if one of them ever won the lottery, they’d give the other $1 million. (Not a bad deal really.) He also said he plans to give some of the winnings to charity. And then after that, he might take a trip with his wife to Vietnam, a country he’s already been to about 20 times.

Oddly enough, as the site Munchies points out, tales of people winning the lottery by using fortune cookie numbers are not that uncommon. They cite another news story of a million dollar fortune cookie winner as recently as this past October. So it would seem that lots of people must actually use the numbers they find on fortunes for these kinds of occurrences to keep happening. But what’s even stranger is a research project from 2017: Walt Hickey crunched the numbers on 1,050 fortune cookies, comparing them to the past 20 years of Powerball drawings and found that, indeed, fortune cookies turned a small profit compared to the big losses you’d rack up playing random numbers. His theory: Maybe numbers were added to the cookie pool after they had already won. It’s a sensible assumption, though it’s also possible that fortune cookies are just more reliable than we’ve been giving them credit for all these years.