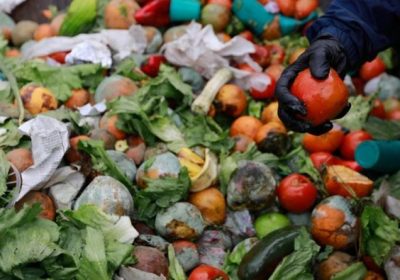 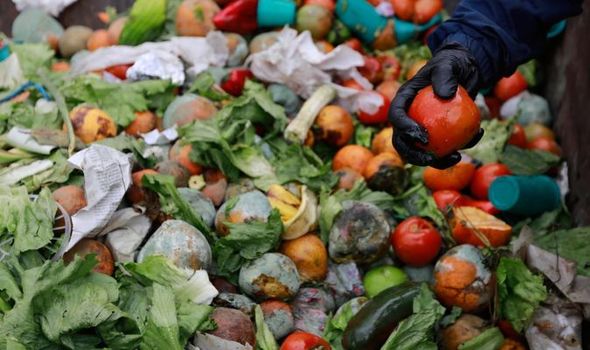 Other foodstuffs likely to make their way into the trash include bananas, cucumbers, strawberries and potatoes.

The study of 2,000 adults, commissioned by Waitrose, found that one in seven (14 percent) forget to check use-by dates, while nearly one in ten buy more than they need in the first place.

And despite 67 percent taking care to plan their food shop for the week ahead in a bid to eliminate leftovers – more than a fifth forget about items they’ve bought until it’s too late.

The research also found eggs, yoghurt and cheese are commonly thrown away, along with fruit and vegetables such as tomatoes, mushrooms and oranges.

Not planning a supermarket shop, overestimating portion sizes, and buying food for recipes they don’t end up cooking are also among the reasons why households produce so much food waste.

Marija Rompani, director of ethics and sustainability at the John Lewis Partnership, said: “When we think of the triggers of global warming, we think about fumes pumping out from power stations, car exhausts or planes.

“When we throw food away, we waste the precious resources it’s taken to grow, package and transport it – and as it rots in landfill, it produces methane, a greenhouse gas more potent than carbon dioxide.

“So the simple action of throwing food in the bin has more of a negative impact on our planet than people often realise.”

The research also found more than a third haven’t considered the impact that throwing away food has on the environment.

More than one in ten confessed to “not thinking twice” about throwing away food, with a further 20 percent not feeling as guilty about binning fruit and veggies as they do meat.

And 71 percent think nothing of throwing away their fruit and vegetable peelings because they see no other use for them.

As a result, 81 percent discard their fruit and vegetable peelings, with 16 percent not seeing any nutritional benefit to these kinds of leftovers.

Yet three-quarters of those polled via OnePoll, claimed they were raised in a home where wastage was a big no-no.

Marija Rompani added: “Nobody buys food with the intention of throwing it in the bin, but with UK homes discarding 4.5 million tonnes of it every year, we clearly need to take more action.

“This is why, through our Partners Against Waste platform, we have pledged to halve food waste in our supply chain by 2030.

“We also sell oddly shaped vegetables in our A Little Less Than Perfect range, as well as forgotten cuts of meat, and will continue to work closely with FareShare to donate surplus food to vulnerable families across the UK.”

TOP 20 MOST COMMON FOOD ITEMS WHICH ARE THROWN AWAY AFTER GOING OFF: