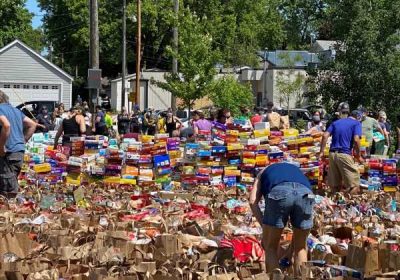 It’s a tough time in America right now, as communities across the country are reeling from the death of George Floyd at the hands of the Minneapolis Police Department. Over the past week, this tragic and all too common loss of black life has sparked widespread (largely peaceful) protest across the country, both in Minneapolis and far beyond.

While most mainstream news coverage can tend to focus on incidents of violence against people or property (it’s the imagery that sells, after all), that coverage obscures the vital work taking place on the ground to not only heal afflicted communities, but potentially help establish a better version of the “new normal.”

For example, Minneapolis’ Sanford Middle School, located mere blocks from the (now-former) site of the city’s 3rd police precinct, recently put out a call that it needed 85 meal kits for students and families after damage to nearby grocery stores made accessing food more difficult.

"We had a parent that reached out to us who was checking in with other families in the community, and we heard they needed food," Jabari Browne, a Sanford Middle School special education teacher, told Insider. "Due to the protests, a lot of stores are shut down and burnt down, and we have a lot of kids that don't have transportation."

As evidenced by a CBS Minnesota report over the weekend, a deluge of donations poured in to the point that the school met its goal a few hundred times over. For most of Sunday, the line of cars waiting to drop off supplies stretched for blocks as an army of volunteers sorted through what Browne estimated as thousands or even tens of thousands of donations.

I mean just look at this mountain of cereal.

Though the overwhelming show of support might seem shocking, Sanford principal Amy Nelson told CBS Minnesota that it’s “not surprising.”

“We live in a great city, and we have people who want to help. The response has been very overwhelming in a very positive way.”

Though some would want you to believe that Minneapolis is currently engulfed in turmoil, this is just one example of a community coming together to offer mutual aid. Social media is overflowing with evidence of other food drives, community cleanups, and even volunteer efforts to look after the homeless.

At the end of the day, goods and property are replaceable. Black lives are not. It’s easy to feel hopeless right now, but the good is out there if you look for and actively participate in ways that manifest it. Here’s to hoping the spirit of community support in Minneapolis and beyond continues long after the news cycle moves on.