A Potato Salad Flowchart for Every Kind of Eater 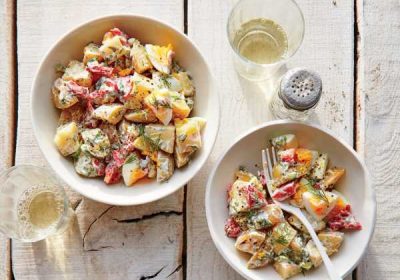 Everyone loves potato salad—or so it would seem. That classic American version that appears at every event after Memorial Day (chopped celery and sometimes egg, absolutely packed with mayonnaise) isn’t everyone’s first, or even second choice these days. Mayo is a constant point of contention among families and groups of friends. Like cilantro, some folks just hate the stuff. And do people even really like celery? A warm German potato salad could be a good alternative in that case (tangy mustard-based dressing, slicked with caramelized onions), but it does have bacon in it, so you’re jeopardizing the potato salad experience of any non-meat-eaters in the house. It’s pretty easy to swap in Veganaise in the classic recipe, but what if your favorite vegan doesn’t like creamy dressing? Look to this potato salad flowchart, that’s what! It’ll help you find your potato salad bliss.

Get the recipe: German Potato Salad

Get the recipe: Classic Potato Salad

Preheat the oven to 400 and place a medium saucepan of salted water over medium high heat. Bring the water to a boil, reduce heat to medium, and cook lentils until tender, about 15 minutes. Drain and set aside.

Meanwhile, toss potatoes on a rimmed sheet pan with 2 tablespoons olive oil and plenty of salt and pepper. Bake until potatoes almost fork tender, 25-35 minutes depending on their size, tossing halfway through. Add green beans to the sheet pan and toss with the potatoes. Bake for an additional 10 minutes. Set pan aside to cool slightly.

Finally, make the vinaigrette: In a large bowl, whisk together shallot, vinegar, mustard, and lemon juice, then slowly stream in ¼ cup olive oil until the mixture is emulsified. Toss the lentils with the vinaigrette, then toss in roasted vegetables. Season with salt and pepper to taste. Let salad sit for 10 minutes, then toss with arugula and transfer to a serving dish.

Wash potatoes and place in a large stockpot of water salted with ½ cup kosher salt. Bring water to a boil over medium high heat, then immediately reduce heat to a simmer and until potatoes are fork tender, about 15-20 minutes (keep an eye on them!). Drain potatoes and transfer to a sheet pan to cool quickly. When cool, halve the potatoes.

Meanwhile, in a large bowl, mix together sour cream, yogurt, garlic, mustard, 4 of the sliced scallions, and the ½ cup dill or parsley. Season with black pepper. Toss with potatoes and chill until you’re ready to serve.

When you’re ready to serve, toss the mixture again, then transfer to a serving dish. Top with remaining scallions, dill or parsley, and crushed potato chips.

Wash potatoes and place in a large stockpot of water salted with ½ cup kosher salt. Bring water to a boil over medium high heat, then immediately reduce heat to a simmer and until potatoes are fork tender, about 15-20 minutes (keep an eye on them). Use a heat-safe liquid measuring cup to scoop out ¼ cup potato-cooking water and set aside. Drain potatoes and transfer to a sheet pan to cool quickly. When cool, use the bottom of a glass or measuring cup to gently smash the potatoes.

Meanwhile, in a large bowl, mash the cannellini beans with 5 potato halves until very smooth. Whisk in potato-cooking water, shallots, mustard, and vinegar. Slowly stream in olive oil until mixture is emulsified.

Add celery, pickles, and all but 2 tablespoons of the dill to the bowl along with the potatoes, and gently toss the mixture to combine. Transfer to a serving dish, and top with remaining dill.