Home » Everyday Meals » A Week of Dinners from Angela Davis, the Twitter Queen Behind The Kitchenista Diaries

A Week of Dinners from Angela Davis, the Twitter Queen Behind The Kitchenista Diaries 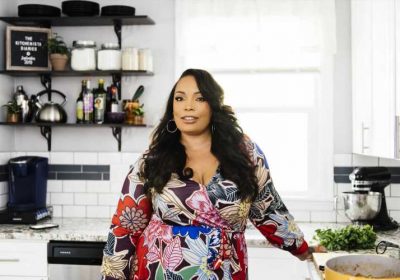 Angela Davis really likes to roast things — both in the kitchen and on Twitter. If you don’t already know (or follow) Angela, she’s the boisterous personality behind The Kitchenista Diaries, a popular food blog which got its start at the request of one of her Twitter followers who wanted recipes to accompany the food photos she frequently posted online. In the years since, Angela has quit her job as an accountant, monetized her blog, published multiple e-cookbooks, started a catering and personal chef career, and grew her reputation as one of the funniest food personalities on Twitter.

If you follow @TheKitchenista, make sure you have popcorn on hand. She’s the internet’s queen of hot food takes: When she tweets about washing chicken, mac and cheese watchdogs, the existence of margarine, and the merits of Jiffy cornbread, people can’t help but chime in. It’s like sitting at one big family dinner table where everyone’s talking over each other, arguing over who’s right and who’s wrong, all while passing around a casserole dish.

We took a break from scrolling through Angela’s Twitter and visited her IRL in her Detroit kitchen to see what a week of dinners looks like for her, and learn her website’s most popular recipe and which food opinions she feels most strongly about.

A Week of Dinners from Angela Davis

I love any combination of rice and beans, and this rendition reminds me of my Cape Verdean American heritage. We utilize cured chorizo and Linguiça sausage often; either can be used here. Leftovers are even perfect for breakfast when reheated with a fried egg on top!

One-skillet dishes are a life-saver on busy nights. Less to clean up! Cabbage is a quick-cooking, inexpensive veggie that you can eat a ton of to fill up, so it’s great for fast, low-carb meals.

Soups are great for using up the last of roasted turkeys after the holidays, or even rotisserie chickens throughout the year. The beauty of curry powder is that it adds so much flavor to the pot that you’d think you simmered the soup all day. It’s a versatile recipe and would work with any of your favorite curry powders or pastes.

Once in a while we do vegetarian dinners, so I came up with this one combining all my favorite Latin food ingredients. It reminds me of my days in South Florida. Canned beans will always do the trick on work nights, but these stuffed plantains really shine with leftover black beans that were cooked from scratch. (You can also find that recipe on my blog.)

Sheet pan dinners are an easy way to get all your proteins and veggies cooked at the same time. Leaving shrimp in the shells not only saves on prep work, but also results in more flavorful cooked shrimp.

Who are you cooking for every night?
We used to live with my parents in Virginia but recently moved to Detroit, so now it’s just me and my two kids. It’s different not cooking for everybody and being back to our small family situation. I do have a personal chef client who lives five minutes away that I cook for two to three times per week. I’ll combine some of his meals with mine.

Sounds like it! Do your kids like to help out in the kitchen at all?
My son is 16 and is kind of at the age where he can’t be bothered. He does help clean up, though. My daughter is 5 and she loves to help — especially if I’m baking. She has her own little apron and will stand on a chair at the counter to watch. I’ll teach her ingredient names as we go. She loves to go shopping with me too.

Speaking of shopping, what are some things that are always in your cart?
Buttermilk is something I run through, so there’s always that. I pick up a whole chicken once a week to either roast or break down into parts.

We eat a lot of kale and collard greens, so there has to be a leafy green on my list. I like to sauté them or put them in soups. I always get cilantro, parsley, and mint too — I put mint in everything.

Let’s see what else … oh, I waste so much money on pre-chopped fruit. It’s my guilty pleasure. It’s so easy just to chop yourself, but I can’t help it.

My dad was allergic to shrimp, so now I can keep a bag of frozen shrimp in the freezer for quick meals. I also cook an insane amount of eggs and always have a Parm wedge. And those are just the regulars!

That’s a lot! Do you have a go-to grocery store in Detroit yet?
I’m still learning them! I’m at Whole Foods several times per week — it was much further away from where we lived in VA, so I’m becoming a Whole Foods fanatic. I’ve started shopping at a few local markets too. Eastern Market is only open on the weekends, so I go on Saturdays to pick up fresh produce.

Okay, so say you had to make dinner with whatever is in your fridge at this very moment. What’s going on the plate?
I’ve been making a lot of grain bowl salads lately. I have chicken thighs right now so I’d grill those, cut them up, halve some cherry tomatoes, cut up some cucumbers, open a can of chickpeas, and add some fresh mint, parsley, and lemon juice. Put it all over some quinoa.

Honestly, I probably cook differently than most people. All of my work runs together, so whatever recipe development project I’m working on for my blog kind of dictates what we have for dinner. Our regular weekday meals are pretty much what I’m making digital content-wise, so they might be a little more complex than a regular weeknight dinner. I make a lot of Sunday dinner-type dishes or specialty foods during the week. On what I consider to be days off, I make skillet dishes or sheet pan dinners, or use my Instant Pot. If I can get it done in an hour, it’s great.

Ah, the Instant Pot. *Chef’s kiss.* What other tools do you swear by?
I love my heavy-duty sheet pan. Don’t just use a regular cookie sheet — there’s a big difference in the way they perform. I put the pan in the oven while it preheats and then when I put the food on it starts sizzling right away. If I’m making a sheet pan dinner with a sticky sauce, I use a silicone mat on the pan to save time during cleanup. That way, everything lifts right up. I also love my immersion blender, and sous vide circulator. (I bring it when I’m traveling.)

If I had to pick, though, my cast iron skillet is my favorite. You can use it on the stovetop, in the oven — the heavy bottom makes for a really good sear, and you can bake in it.

Which of your recipes is hands-down the most popular with The Kitchenista Diaries readers?
My mac and cheese, definitely. It’s a holiday staple — everybody makes it. A lot of people have adjusted it to make it their own. You’ll see it pop around Thanksgiving, Christmas, Easter, cookouts. I’ll get hundreds of pictures from people who’ve made it — a lot of times, for the first time! It’s a cool feeling. My main thing is that you don’t need fancy cheese to make a really good mac and cheese. I use cheddar, pepper Jack, and muenster, with a bechamel sauce. But you have to season the bechamel sauce really well. And don’t overcook it.

According to Twitter, you have extremely strong mac and cheese opinions, so I trust you on this one. What are some of your other strong food opinions?
Not washing chicken. I’ll die on that hill. I’m also really against using lighter fluid when barbecuing. And boiling ribs — you don’t need to boil them before you put them on the grill. Sometimes, I get caught off-guard with the things that people get super upset about. People have these deep-rooted cooking traditions, and here I am, shaking the table.

Who are some of your other favorite food bloggers to follow?
One of the oldest blogs that I follow is Smitten Kitchen — I’ve always liked her. I love Reina from the Sofrito Project, and Jehan of Jehan Can Cook. She does a lot of Caribbean recipes.

When it comes to food, what are you most excited about these days?
I’m working on developing recipes for restaurants now! That’s a new avenue for me. I’m writing them from a home cook’s perspective and will be working with a restaurant chef to convert them into large-scale terms. One of them is an upscale bar that will focus on small plates and shareable apps, and the other is a chicken and waffles restaurant.