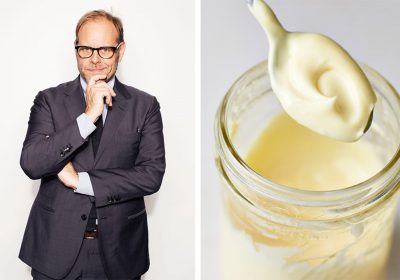 I will never cease to be amazed by the genius that is Alton Brown. Just when I think I’ve got a handle on a cooking technique, he swoops in and shows me a method that I would have never considered. In the past year alone, I’ve learned that adding salt to your coffee make it less bitter, and that you should add dry pasta to cold water before boiling, among many other things.

This got me thinking a little bit: How can I set up my kitchen to be more like Alton’s? What ingredients does he regularly rely on that will make me a better cook? So I did some digging. After looking through his pantry essentials in Everyday Cook, and perusing many of his recipes, we’ve determined that the following five ingredients really are Alton’s secret weapons in the kitchen. He uses these ingredients in smart, interesting ways that we might not have considered, which makes them that much more enticing.

Alton calls sumac his “secret weapon” in Everyday Cook. He explains that he originally became obsessed with the ingredient when he was studying the history of hummus, because sumac added a citrus-y element to the spread without the addition of lemon. Alton uses sumac in a lot of his fried recipes to cut through the oil. Learn more about this powerhouse ingredient here.

Alton has a thing for small, oily fish — especially sardines. He says they’re great in dips, and spreads and also add quality omega fatty acids to your diet. His only rule: You need to purchase oil-packed sardines, instead of the kind you find in water. You can learn more about sardines here.

Smoked paprika always seems to come up in the most unusual recipes from Alton Brown. For example, he suggests adding it to your fruit pies (!!) and also his famous baked mac and cheese recipe. In Everyday Cook he explains that smoked paprika varies in flavor and that you should use it quickly before it loses its efficacy. You can learn more about the spice here.

Try a recipe from Alton: My Own Private Cheeseburger

The most surprising ingredient that I think Alton uses on the regular is mayo. He doesn’t just use it for sandwich spreads! He’s been known to use it to make scrambled eggs and even chocolate frosting. We also know first-hand that he’s pretty partial to Duke’s mayonnaise.

Alton also seems to have a fondness for chipotles in adobo — particularly the sauce. You can find this ingredient in his fish tacos, sweet potatoes, and grilled pork tenderloin. If that’s not a reason to always have a can hanging around your kitchen, I don’t know what is. And while you’re at it, check out this smart way to save chipotles in adobo if you don’t use the full can.