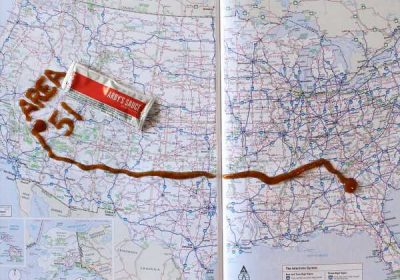 Anyone who has spent time online knows you shouldn’t feed the trolls. But when it comes to the internet’s planned attempt to storm Area 51, Arby’s says it’s going to, quite literally, feed the trolls.

For those who aren’t aware of the recent Area 51 madness, a quick recap: On June 27, Matty Roberts created a joke Facebook event entitled, “Storm Area 51, They Can't Stop All of Us.” (Joke Facebook events have kind of been a thing recently.) The event went viral — it currently has 1.9 million people listed as going and another 1.4 million interested — to the point where the Air Force basically came out to say, yeah, don’t do that.

Regardless, the date is set (Friday, September 20), the event is still up (as of this writing), and the whole thing even has its own website, StormArea51.us, which urges visitors to “stay tuned for a special announcement” because “something big is coming.” Recent rumors suggest Roberts may try to turn it into some sort of festival — and despite starting as a gag, nearby hotels are reportedly booked up.

Unsurprisingly, the interest of over 3 million people has advertisers’ eyes lighting up — and plenty of brands are looking to get in on the bizarreness. For instance, last week, Bud Light showed off a special Bud Light Area 51 label and offered “free Bud Light to any alien that makes it out.” Now, you’ll have some food to pair with that beer because Arby’s has announced they’ll be showing up at Area 51 come September.

The roast beef chain has promised that its food truck will be at Area 51 on September 20, regardless of what transpires, serving a “secret menu” built to match the secrets which are hidden within the Air Force base. “We can’t confirm if there are aliens at Area 51. But, if they do show up, they deserve the best meats on Earth,” Jim Taylor, Arby’s chief marking officer, said in the announcement. “If not, Arby’s will still be there serving the planet’s best meats to everyone else attending this historic event.”

Fair enough, but at this point, the biggest mystery actually is what this so-called “historic event” will turn out be. At this point, it might just be a bunch of people standing around eating Arby’s.