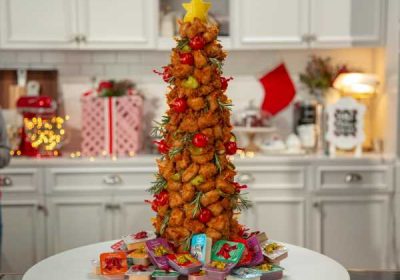 This fun project will undoubtedly be the biggest hit and talk of the holiday party. Medium nugget trays are readily available at Chick-fil-A—just be sure to call and place the order ahead of time. However, for a more cost-effective version, the knockoff nuggets from Sam’s Club will do the trick as well. This can be prepared hours ahead of time as long as it’s refrigerated. It’s not like anyone’s gonna turn down cold nuggets.

Place Styrofoam cone on center of disc, and lightly trace the base of cone. Using a paring knife or other sharp object, carefully cut and remove inside circle of disc. Set cone in disc cut out.

Using the yellow toothpicks, skewer 1 nugget per pick, and stick into cone starting around the bottom and working upwards. Repeat until tree is covered with nuggets. It’s ok if there are some white spaces showing.

Slide pickles into any open crevices between nuggets to cover any white spaces.

Break 1 1/2 -inch pieces of rosemary from stem, and fill in open spaces remaining throughout tree.

Slice ends off lemon. Using a sharp paring knife, slice into the skin lengthwise until it reaches the flesh. Run knife between flesh and pith as it is unrolled, removing flesh from peel. Using a knife or a sharp cutter, cut a star shape from peel. Use remaining yellow toothpick to attach star to top of tree.

Using the hot glue gun, attach bows to sauce packets, and arrange at base of tree.