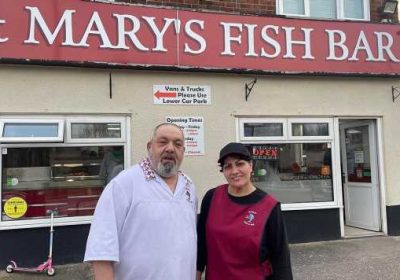 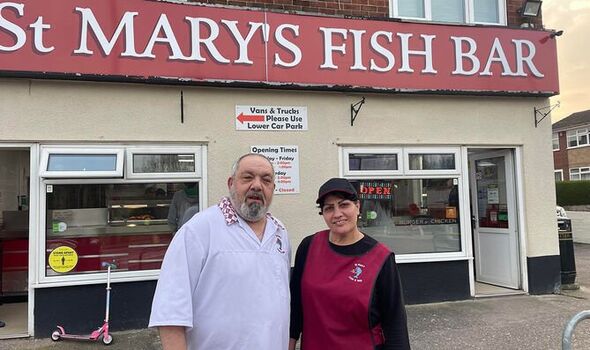 The owners of St Mary’s Fish Bar in Blurton, Stoke-on-Trent, were devastated when a negative review appeared on their Facebook page. The woman who posted the review claimed that workers at the family-run chippy “were too busy having a conversation between themselves” to acknowledge her arrival.

The customer said she and her son decided to leave and buy their lunch from the Fish Net in nearby Longston instead.

Fodoulla Nicolaou – the daughter of Nick and Helen Nicolaou who own St Mary’s – has vehemently defended the takeaway and insisted the couple had only arrived 30-seconds before deciding to leave on Wednesday lunchtime (June 15).

She is running the chippy with her brother while her parents are in Cyprus.

The 36-year-old said: “We had one member of staff in the front who was finishing an Uber order, my brother was doing prep at the back and I was arranging the orders for the shop from the deliveries.

“As I went to serve her, she said ‘is there another chippy around here?’ and walked out.

“I thought maybe she didn’t like the prices, as everything’s gone up, and walked out. That was my initial thought.

“Then that evening we saw that there was a one star review. She didn’t comment on the food, it was completely unfair, she didn’t give us a chance to speak to her.

“I think it’s ridiculous and petty. Maybe we should have said ‘we’ll be with you in a second’ but I was about to go and serve her.

“There wasn’t another customer in the shop, she knew she was next.”

Fodoulla was then left even more upset when other people on Facebook backed the woman after she shared her review in community groups.

She added: “We work really hard and were really upset that other people then jumped on to try and say horrible things about our business.

“There were people commenting saying we’re disgusting, we’re vile people and that we don’t deserve to have our own business.

“You know when you post something like that in a group that you’re going to get responses.

“Are we not allowed to defend our shop? If I was going to leave a review, I would expect to hear back from the business.

“But we’re not allowed to do that because we get demonised for standing up for ourselves. I don’t think we did anything wrong.”

Fodoulla was pleased to be able to put across her side of the story when the woman’s husband came to speak to them in person.

She added: “We had a really good chat for 10 minutes and I explained my side, he explained his wife’s side. But he didn’t know that she had shared the review into two Blurton Facebook groups which have more than 1,000 members.

“I thought it was lovely that he came to speak to me, he was really nice. His wife says she wants an apology, but I’m not apologising for defending our business.

“If she hadn’t shared it everywhere, I probably would have spoken to the lady and said ‘ok we could have handled it a little bit better’. But she’s posted it in the two groups and it’s caused me so much grief.”

Fodoulla has worked in chippies since she was a teenager, first in Stafford where her parents opened their first chip shop and then in Blurton for the last seven years.

She added: “I’ve worked in chip shops since I was 13 and I’m now 36. We try our best to be polite, to serve our customers as quickly as we can, while dealing with circumstances where we get nothing but grief, then to get attacked on Facebook.

“My parents are in Cyprus. My nan has been really ill and my mum and dad are by her side. They’ve been really upset by this too. They know how much damage it can do. Me and my brother are here six days a week, doing 12 hour shifts with no break.

“People have enough on their plates. They don’t know what’s happening with our nan and we don’t want the sympathy card, but people don’t understand we’re normal people, we have things going on in our life.

“When I go somewhere and feel like I haven’t had a good experience, I don’t need to leave a Facebook review. I just think they might have been having a bad day. We weren’t having a bad day, we didn’t even get a chance to properly speak to this lady.

“We’re going to delete our business Facebook page because it’s really disappointing to think we work so hard, but anybody can just leave a nasty comment for no reason.”

Fodoulla added that some of the regulars had been in to sympathise with the situation.

She said: “They had seen the comments on Facebook and one said they can’t believe how pathetic some people are. They said there was no need for us to worry about it.

“We get some really lovely people in here, we usually have a nice smooth sailing day.”

Under the heading “I don’t recommend this place” the irate customer wrote: “Awful service. The folk working there were too busy having a conversation between themselves to even acknowledge us.

“So instead of waiting for them to actually say ‘hi, be with you in a moment’ we walked out and went to The Fish Net in Longton.

“Far better chip shop to spend out nearly £20 order in and they were cheaper.”

Fodoulla Nicolaou responded: “Funnily enough, none of us have even seen you before or actually want your kind of custom.

“My brother was cooking, my staff was doing an Uber order and I had just walked in and heard you say’ lets go to another chippy’ after walking in a moment earlier.

“Did you speak to us and we ignore you? No. Sorry if we are busy and have other jobs also so that you didn’t get the attention you clearly require to buy some food, and then have the audacity to go online and leave a stupid review.

“No one cares about your £20 in FishNet. Honestly so petty and ridiculous, you were in the shop for a whole 30 seconds. Grow up and get a grip.”

The customer replied: “You clearly need training in customer service. Again your attitude here says more about you than me. We and I mean, we, as my husband would come into the shop, have been going in there for years. You are the ones that need to grow up, obviously too immature to run a business.”

Fodoulla then hit back: “My customer service skills are fine thanks, been running businesses since my teens, but when there are some people who clearly have nothing better to do than leave crappy reviews, you think I should just tolerate it and not defend myself? Absolutely not.

“You were in the shop for 30 seconds as we all noticed and heard your bad attitude comment as you walked out.

“Glad you enjoyed FishNet, have a nice day. Go moan elsewhere thanks.”