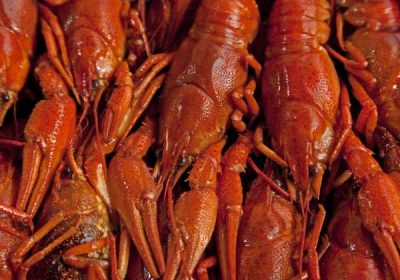 The summer months are closing in, and the warmer temperatures have us all dreaming of an ice-cold treat. And sure, for most people that fantasy includes a heaping scoop of strawberry, vanilla, or chocolate ice cream. But, for a select few living in Houston, that daydream may actually involve crawfish — yes crawfish — ice cream.

Houston’s Red Circle Ice Cream is well-known for creating some rather outlandish ice cream flavors. Right now, the ice cream shop even has flavors like Hot Cheetos, Spicy Texas Chili, and BBQ ice cream on the menu. But, it’s the Crawfish-flavored ice cream that has everyone talking.

According to Food Beast, the ice cream really does contain garlic, butter, and Cajun seasoning, all mixed in with sweet ice cream and real crawfish. Apparently, people are lining up around the block for a scoop.

“It’s crawfish season so it was a no-brainer for us,” Nickey Ngo from Red Circle explained in a segment with Fox26. “If you live in Houston you know it’s a big deal for us. So, we put our own spin on it.”

As she noted, it doesn’t actually come with a crawfish topping, but rather, comes with the flavor of crawfish thanks to the team boiling it down to add just a taste. And, as the news anchors noted while giggling through the segment — “it tastes like a boiled crawfish, but cold, with ice cream.”

WATCH: How To Make Crawfish Cakes

If crawfish isn’t quite the flavor you’re after, Ngo noted that the ice cream store is also introducing a Horchata flavor, and will be introducing other seasonal treats too. If you really want to try the crawfish flavor you may have to act fast as the ice cream shop is only rolling it out for a limited time. (Come on, be brave!)