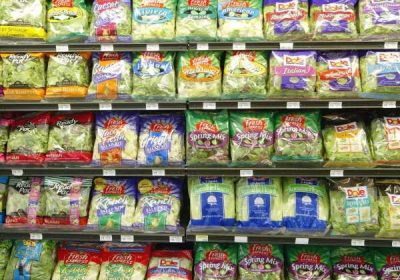 The CDC and FDA are currently investigating a multistate outbreak of Cyclospora infections linked to bagged salads sold at ALDI, Hy-Vee and Jewel-Osco stores. The salad kits were sold in six states, including Iowa, Illinois, Kansas, Missouri, Minnesota and Nebraska. Of the 76 people who have reported illness,16 have been hospitalized.

Cyclospora is a microscopic parasite that causes an intestinal infection called cyclosporiasis. According to the CDC, “Cyclospora is spread by people ingesting something—such as food or water—that was contaminated with feces (stool).” Cyclospora can cause diarrhea with “frequent, sometimes explosive, bowel movements,” according to the CDC. Other symptoms include loss of appetite, weight loss, stomach pain, bloating, gas, nausea and fatigue. Flu-like symptoms such as vomiting, body aches, headache and fever have also been reported.

Several ill people reported eating grocery store salad kits before they got sick. Here are the salad kits identified by the CDC:

Though the CDC believes these bagged salads are the source of this outbreak, they don’t explain all of the illnesses. However, if you live in one of the six affected states and have purchased these products, the CDC is advising you not to eat them and to dispose of them immediately, even if you haven’t gotten sick. If you think you may have eaten one of the contaminated products and are experiencing symptoms, contact your local health department.

For now, this investigation is ongoing. We’ll update this story as soon as new information becomes available.