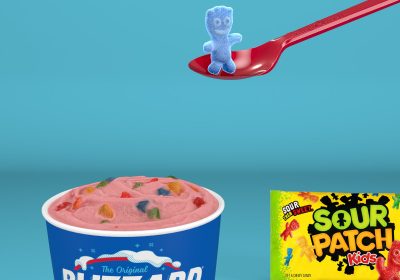 Is there anything Sour Patch Kids can't do? The "first they're sour, then they're sweet" gummies are a childhood favorite of the millennial set, meaning we've seen a fair amount of nostalgia-invoking mashups appealing to kids of the '80s and '90s. Heck, there's even a Sour Patch Kids breakfast cereal. This summer, Dairy Queen is taking the iconic candy and blending it into its own iconic menu item to bring us the Sour Patch Kids Blizzard Treat starting today.

The spoonable treat "features Sour Patch Kids Bitz blended with Sour Patch Kids Redberry flavored soft serve to deliver a multi-sensory, delicious treat with a fun-and-mischievous spirit," according to a statement from the brand. And it's not the candy's first foray into frosty treats, as there have been both Sour Patch Kids ice cream in grocery stores and from Baskin-Robbins, and 7-Eleven Sour Patch Kids Slurpees in the past.

I tried the Sour Patch Kids Blizzard Treat today and was unsure what to expect as a notably sour candy met up with the dampening effect of cold, smooth ice cream. As mentioned above, there aren't any whole "kids" in the mix, as the candies have been chopped up into pieces. The Redberry ice cream has an artificial cherry-like flavor going for it (which isn't necessarily a bad thing in candy concoctions), but the whole thing is actually not as sour as I expected. If part of your affinity for Sour Patch Kids is that exterior dusting of gritty, crusty sugar crystals, then you're going to be missing that here, but there's still a good bit of fruity, tart flavor that doesn't get completely lost in the creaminess of the soft serve. And unlike standard gummy beards atop ice cream, Sour Patch Kids' stretchier texture means they stay a bit softer in the cold conditions to retain some of that tooth-stickingly-satisfying chew.

Sour Patch Kids Blizzards hit participating Dairy Queen locations nationwide today, July 1, 2019, and will last throughout the month. They're being rolled out in conjunction with National Ice Cream Month which you don't have to convince me is a real thing. I'll be eating ice cream until at least August, regardless! The chain even put out a game that challenges players to catapult Sour Patch Kids into a Blizzard using a signature DQ red spoon over at dqspoonapult.com.