Home » Everyday Meals » Does Tapping the Top of a Soda Really Preventing Spewing?

Does Tapping the Top of a Soda Really Preventing Spewing? 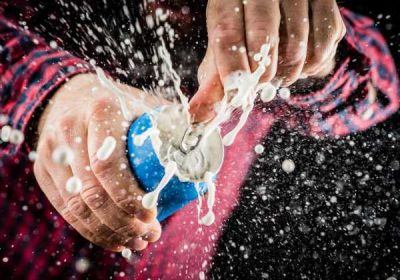 I was in middle school the first time I saw anyone do it: A friend of mine tapped the top of her soda can with long fingernails. I must have given a quizzical look to witness this unexpected hammering because she looked up at me and said defiantly, “What? You don’t tap your sodas?” She went on to explain that tapping the top of a soda can was a sure-fire way to keep it from exploding on you. Because that was something I’d experienced firsthand more times than I’d like to admit, I was on board. I tapped my soda can. It didn’t explode.

And that’s how I became a tapper.

But a few months ago, when I was instinctively tapping the top of a soda before opening it to release that crisp rush of carbonation, my brother asked why I always did that. I assumed, a product of the same household and hometown as me, he had surely been taught the ways of the tappers, too. It seems he had not, and he thoroughly did not believe a word of my explanation.

I assured him I had tapped the top of many soda and carbonated water cans in my life, and none had exploded.

“Do you think it’s the tapping? Or just that the can wasn’t shaken before you opened it?” he asked.

Not one to appreciate when someone points out where I could be wrong, I defensively said it was most assuredly the pre-opening knocks that were to credit for my long-running success. He, not one to let me win any argument, said he’d take that bet.

I should have known the mess that was coming when a quick internet search revealed multiple methods for “preventing” a soda can from spewing: tapping on the top, tapping on the bottom, tapping on the sides, flipping the can over slowly. But, out of naivety or sheer idiocy, I decided to give this urban legend a go—several times. After all, I needed to prove my brother wrong.

Why do cans overflow in the first place?

To understand why some cans overflow while others don’t, it helps to know exactly what it’s like inside a soda can. The bubbles in soda are made from carbon dioxide (CO₂) gas, and before cans are sealed, they’re pressurized to keep the CO₂ from escaping, leaving you with a flat, lifeless soda. When the top of a soda is opened, air rushes in, and CO₂ rushes out.

When the soda is disturbed, some of those bubbles can attach themselves to the side of the can. Then, when air is introduced and the CO₂ escapes, it may take anything in its path (soda, specifically) with it.

But if you tap the can first, you can move those bubbles from the sides into the center of the can, where it’s more likely to form one big bubble that just harmlessly (or perhaps with a little extra fizz) escapes as soon as the can is popped open.

Can tapping keep sodas from overflowing?

My first experiment was to test opening a can that had been jostled from a soda vending machine. I ordered two. I tapped the first one, but not the second. Neither exploded.

My second experiment was to carry two soda cans in a lunch tote and walk several hundred feet to simulate carrying soda from a desk to a lunch spot at work. I tapped the first one. No explosion. I tapped the second one. A bit of fizz came up, but nothing out of the ordinary.

My third experiment was an all out shake-up. I took two soda cans, gave them each a good five-second shake, then stepped into my shower. (I’ve seen soda explosions before, so I needed a safe space.) I opened the first can (no tapping), and soda flowed out all over my hand. It wasn’t explosive, but clearly the carbonation was disturbed. I tapped the second can and out came more soda.

OK, so maybe I hadn’t tapped hard enough or long enough. I did it again, this time giving five distinct taps to the top of the soda can, in the spot where the ring sits on the mouthpiece. Pop—and nothing. No soda, no spills, no explosions.

I repeated it again. Five seconds of shaking. Five decent taps to the top. Punch open the soda top and … Soda came spilling out but not as freely as before. Was this a failure? Or proof that the technique only works sometimes? It’s the latter it seems.

But that’s not to say it’ll help in every case. There is no way to know if the taps were sufficient to move those bubbles. So one time it might calm the pop, and the next, you might be swimming in sticky stuff.

It’s best if you can let all cans rest for a bit before you open them if you have any doubt that the bubbles have been disturbed. We know it’s tempting to dive right in when you’re thirsty, but no one wants to wear their beverage.