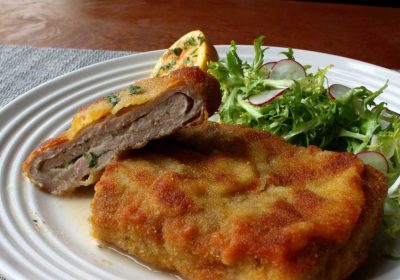 Any mild cheese will do. Substitute regular bread crumbs for the panko if desired.

You can bread these ahead of time and refrigerate until you’re ready to start frying.

Cooking time will vary based on thickness of your cutlet. Try not to cook past 145 degrees F (63 degrees C), as it will dry out. However, the problem with testing with a thermometer is that you’ll have hot juices spurting out, which would be a shame.

We have determined the nutritional value of oil for frying based on a retention value of 10% after cooking. Amount will vary depending on cooking time and temperature, ingredient density, and specific type of oil used.