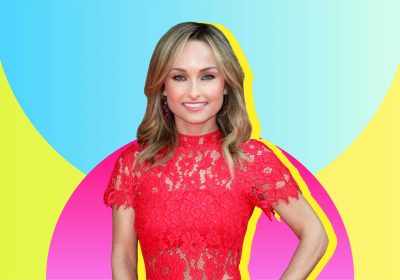 Can you ever get enough of Giada? It’s not just the delicious food — it’s the clothes, the hair, the brilliant smile, really her whole style. Before Giada, I didn’t even know how to pronounce spaghetti correctly (it’s spag-GEH-ti, Ellen!). Let alone pasta, penne, and buono appetito (insert hand gesture here). Spend enough time with her in the kitchen, and you start feeling like you, too, could be a Roman pasta goddess. Giada has introduced millions of Americans to the pleasures of Italian home cooking, making it sexy and fun, and that is divine.

The Food Network star has authored no fewer than nine cookbooks, and if you’re a fan of her shows, then you already know what to expect. A megawatt smile (there are always lots of stunning photos of Giada), and loads of legit good recipes. Unlike plenty of other celeb cookbook authors, Giada is a classically trained chef; she’s a graduate of Cordon Bleu Paris. and worked for several years at the Ritz Carlton and Wolfgang Puck’s Spago. To put it into perspective, she went to the same school as Julia Child, and honestly, has more qualifications.

She is genuinely Italian; she was born in Rome, and moved to California when she was 7. Her great-grandparents owned a pasta factory in Southern Italy, and her grandfather owned specialty foods stores in New York City and Los Angeles. As a former cookbook editor, I’ve always taken her books seriously. She has the chops, she can tell an entertaining story, and the recipes deliver.

So whether you’re wondering which book to buy first, or craving her latest recipe collection, or just craving pasta, here are three favorite Giada cookbooks, which continue to dazzle fans.

Giada’s first book, based on her first show, is still the most talked about — with more than 500 reviews on Amazon, and nearly 40,000 ratings on Goodreads. It introduced her signature style of Italian-inspired recipes, loosely translated for an American audience. She hits the Italian-American classics, with plenty of pasta, meat, and a deeply satisfying sauce chapter, with seven recipes for red sauce, and five for pesto. The instructions are simple, and she won’t send you running for specialty ingredients. There’s a foreword by her mentor, Mario Batali, which may make you cringe in hindsight, but this is the book that put her in the canon, and the proof is in the tiramisu.

The best recipes: Start with a big batch of the Bolognese or turkey meatballs. The tart chicken piccata, sweet veal marsala, and classic lasagna hit every craving. You’ll also find the original recipe for her lemon spaghetti here, the number-one seller on her menu in Vegas.

After Giada had her daughter, Jade, there was a distinct shift in her recipes. Both Giada at Home and Weeknights with Giada were number-one New York Times bestsellers, and beautiful cookbooks, beloved by fans. They broke out of the Italian classics, and brought it home to California, letting Giada open up about how she cooks for her family as a busy working mom. They definitely feel more personal, including photos with her then-husband and Jade. If you want quick and easy dinners, go for Weeknights, which sold nearly 100,000 copies the year it was released. But for my money, I really love Home, which is her top-rated title on Goodreads, so maybe readers agree. She blends family traditions with fresh twists, and with chapters on apps, sides, sweets, and brunch, you can use it anytime you’re bringing family and friends together.

The best recipes: The pea pesto crostini and artichoke and bean bruschetta are tempting bites, while the melon and grilled asparagus salad refreshes a favorite veggie. But readers can’t stop scarfing the espresso caramel bars.

Giada’s most recent show and book travel further afield, back to the Amalfi Coast and Rome, where her family is from and where she grew up. It has to be costing Food Network a small fortune in production costs, because there are gorgeous on-location shots, opening this up into a travel story. After so many years of focusing on convenience, I love that we’re all getting a little more savvy about foreign ingredients, and that Giada can showcase local foods and tempt us with new flavors, picking out a whole red snapper at the market, slicing up fennel like it’s no big thing, and telling you why you have to try Calabrian chiles (no seriously, try them). If you’re hungry for fresh and light Italian fare, and are craving an escape to the coast, come back for this one.

The best recipes: She dares to update cacio e pepe, that classic Roman pasta, but with pancetta and arugula, so it’s hard to get mad about it. Seared branzino gets a super-fresh and fast pan sauce with burst tomatoes and capers. If you want to go big, the Barolo-braised short ribs are fall-apart fabulous.