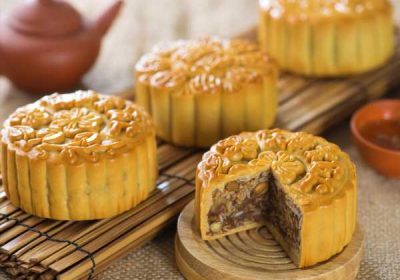 You may have seen the word “mooncake” pop up on your newsfeed in the last week or so, as the Chinese dessert experiences an annual peak during the Mid-Autumn Festival (which occurred this year on September 13). Here’s everything you need to know about the rich pastry with a rich history:

What Is a Mooncake?

A mooncake is a Chinese pastry that has become synonymous with the Mid-Autumn Festival, a harvest festival that’s all about lunar appreciation.

Typical mooncakes are round, and are made with a thick pastry skin and sweet (though savory versions are quite common), thick filling. They often have a whole salted egg yolk in their center.

Mooncakes are traditionally elaborately decorated with Chinese characters and symbols, as well as other delicate designs like flowers, vines, and animals.

The mooncake is the most important food of the Mid-Autumn Festival, which is celebrated on the 15th day (a full moon) of the eighth month of the lunar calendar. It typically falls on the Gregorian calendar somewhere in September or October.

There are variants of the festival celebrated all over East Asia, like Chuseok (Korea) and Tsukimi (Japan), which are both celebrated on the same day in the lunar calendar.

The festival has been celebrated since at least the Tang Dynasty (618–907 CE), and there are a few myths surrounding its start.

According to one legend, emperors in the Zhou dynasty (1045-221 BCE) worshipped the moon every autumn. In return, the moon would grant the Chinese people an unusually productive harvest the following year.

In another story, Chang'e, the Chinese moon goddess, swallowed an elixir that allowed her to fly to the moon after a series of unfortunate events surrounding said elixir. Her husband, Hou Yi, missed her desperately, so he displayed Chang’e’s favorite foods and treats on nights when there was a full moon.

Making and sharing mooncakes is an integral part of Mid-Autumn Festival celebrations. Everything about the pastries is symbolic, from their shape to their filling.

Mooncakes are round because, in Chinese culture, roundness represents unity. Sharing mooncakes between family during the Mid-Autumn Festival is a way to celebrate a family’s completeness.

The salted egg yolk in the center of cake represents, simply, the full moon.

Mooncakes and the Ming Revolution

Mooncakes were also allegedly used as a revolutionary tool. According to legend, revolutionaries spread a rumor that a deadly plague was threatening China. The only way to prevent this plague was to eat special mooncakes that would give special powers to whoever consumed them.

Remember how the pastries are elaborately decorated with symbols and designs? That becomes important here: These mooncakes contained a secret message (whether this message was in or on the cake is unclear) that told the recipient when and how to kill their Mongolian rulers.

This revolt just so happened to occur on the 15th day of the eighth lunar month.

How to Make a Mooncake

Amateur bakers, beware! Making a mooncake at home is not easy. The pastries are relatively expensive—not because of high ingredient costs, but because the process is extremely labor intensive and requires a skilled baker.

“If you’re making (the filling) from scratch, you need to stir fry and re-stir fry the ingredients until they take a dark brown color, especially with lotus seed paste,” Jeffrey L. Wong, a New York resident who grew up with mooncakes, told Chowhound.  “Depending on the quantity,” he adds, “stir frying the fillings can be quite a physical workout as it is usually quite heavy.”

Perfecting the filling is only half the battle, Wong warns.

“The thin dough crust is also where the main difficulty comes in,” he said. “Only skilled hands can make them thin yet strong enough to hold the usually heavy fillings.”

If you insist upon making your own mooncakes, though, Taste of Asian Food has a (comparatively) simple recipe that explains each of the numerous steps in great detail. Find it here.