Hershey's First Official Chocolate Beer Is a Collaboration with Yuengling 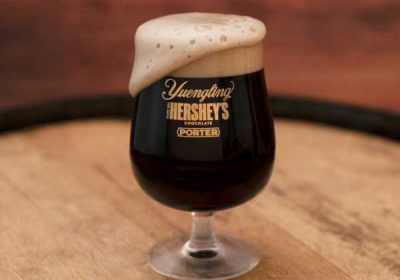 If you want to visit America's best-known chocolate-themed amusement park and America's oldest brewery, only one state can offer all of that excitement: Pennsylvania. The cities of Hershey, home to the iconic candy company, and Pottsville, home to the Yuengling Brewery, are only about 45 miles apart, but despite both brands' history dating back to the 19th century, chocolate and beer have never collided… until now. Yuengling has announced its first-ever collaboration—and the first beer to ever officially bear the Hershey name: Yuengling Hershey's Chocolate Porter.

Though many of these highly-anticipated, limited-edition collaborations (Wawa, anyone?) have ended up in four-packs of cans, this new brew—which is slated to arrive in mid-October—will only be available on draft. The good news, however, is that despite its limited run, Yuengling Hershey's Chocolate Porter shouldn't be hard to find. The beer will be available "in bars and restaurants throughout Pennsylvania, Ohio, West Virginia, Virginia, New York, Connecticut, Maryland, Massachusetts, New Jersey, Rhode Island, Washington D.C., Delaware, Indiana and Kentucky, while supplies last," the brewery states. And Yuengling implies that supplies should hopefully hold up through to Valentine's Day.

"As the sixth generation of the Yuengling family, we have a 190-year history of listening to our fans and looking for new ways to deliver quality and memorable drinking experiences," Jennifer Yuengling, vice president of operations and sixth generation brewer, said in the announcement. "We saw a unique opportunity to partner with Hershey's, a brand known worldwide for its iconic, delicious tasting chocolate, to deliver fans our first-ever beer collaboration. We spent nearly a year developing our Yuengling Hershey's Chocolate Porter and are excited for the world to indulge in the classic taste of Yuengling Dark Brewed Porter blended with the unmistakable taste of Hershey's chocolate."

The result, the brewery says, is a 4.7-percent ABV porter that mixes "Hershey's chocolate with caramel and dark roasted malts for a smooth, rich and delightfully chocolaty finish."

"This Yuengling Hershey's Chocolate Porter is sure to surprise and delight the chocolate fans, and the avid beer-lovers, among us that are looking to try something new and delicious," Ernie Savo, senior director of global licensing and business development at The Hershey Company, added. "Bringing together over 300 years of craft and experience is quite rare in 2019; however, that's exactly what we did." Seems like the genius of mixing beer and chocolate shouldn't have taken so long, but here we are.