How to Make Any Cocktail Into a Jello Shot 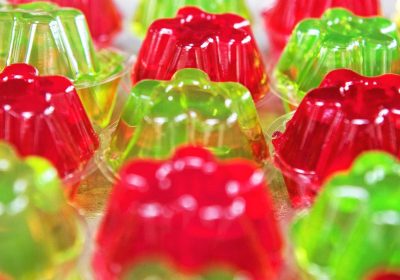 I grew up in the Jello era, when colorful fruity molds graced most holiday buffet tables, when tomato aspic was still a thing that was offered regularly as an appetizer on the menu of the social club my grandparents belonged to, and when a bowl of flavored jiggle was in our home fridge eight days out of ten. I remember when Sugar-Free Jello hit the market, that magical 10 calorie a serving guilt-free wobble, and suddenly our family jello consumption increased tenfold. My hair was thick and shiny, and my fingernails were like iron.

Then came college and the only jello we consumed was in the form of jello shots: little plastic one-ounce containers filled with flavored jello and vodka, for fast booze in a fun wobbly format. As Absolut marketing was all the craze, with our dorm rooms covered in torn out magazine ads, we started experimenting with combinations. Black cherry jello amped up with black cherry vodka for a monoflavor intensity, or orange jello with vanilla vodka for Dreamsicle shots.

I thought the days of jello shots were over after I finished grad school and entered the workforce. But suddenly, in my 30s, they came back. The theater I was working for had an annual booze cruise boat celebration for the staff, and apparently jello shots were traditional. I volunteered for the planning committee and offered to take on the jello shot duty. But I found I could not face down the idea of a bunch of grown-ups on a boat sucking down the jello shots of our youths.

This is why I developed Cocktail Shots. Because one packet of plain unflavored gelatin powder dissolved into one cup of water will gel one cup of any cocktail. Not just vodka and juice, but whatever delights you. So instead of buying the flavored boxes, I just mixed up my favorite cocktails, and a large batch of gelatin water, and mixed them together for gelled shots that actually tasted awesome. I even added traditional garnishes to the containers. Negroni shots with a tiny piece of orange zest. Whiskey Sour shots with a half a cherry. Gin and Tonic shots with a little supreme of fresh lime. Margarita shots, rum and coke shots, Manhattan and Old Fashioned, even a small batch of martini shots with slices of olives embedded in them. They were a huge hit, and I was on Cocktail Shot duty for the entirety of my seven-year tenure on staff.

I don’t make them very often anymore, but if a pal is hosting a summer potluck BBQ or a Fall football party, I sometimes still break them out. They are always a huge hit, both delicious and nostalgic, and super easy to make.

To make them you will need one-ounce deli disposable plastic cup with lids, the kind you would put salad dressing in. For every 16 shots you will need one cup of a mixed cocktail, one cup of water and two packets of powdered gelatin. Mix your cocktail in a two-cup measuring cup with a pour spout. In a bowl, put half a cup of cold water, and sprinkle the gelatin over the top and let sit for ten minutes to bloom and hydrate. Stir in a half cup of boiling water and stir till the gelatin is fully dissolved, then stir the gelatin water into the cocktail. Add a small relevant garnish if you want, pop the lids on, and put in the fridge for at least two hours to set. Put some sort of indicator on the lids to let guests know the contents, and serve chilled.