Home » Everyday Meals » How to Use Sofrito, the Base of So Many Wonderful Things

How to Use Sofrito, the Base of So Many Wonderful Things 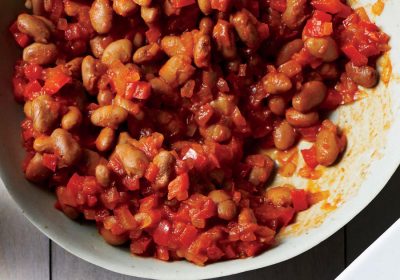 At the base of many cuisines is a magic combination of vegetables from which many complicated, nuanced flavors are derived. For French food, that’s mirepoix—onions, carrots, and celery. For Cajun cooking, it’s the trinity—bell pepper, onion, and celery. Many Indian dishes start out with onions, ginger, and garlic. For Spanish, Latin American, and Portuguese cooking, among other cuisines, the first building block of a good dish is sofrito.

A basic sofrito is onions, bell peppers, tomatoes, and garlic cooked gently in oil. The ingredients vary slightly depending on the dish you’re cooking. In Catalan dishes, using olive oil is a crucial step, whereas in Puerto Rico, sofritos often inculde culantro. But if you’re making a lot of, say, Cuban dishes, then you’re going to end up needing a whole lot of sofrito. It’s such an important building block of many cuisines that you can buy it premade in a jar in a few different variations from companies like Goya.

Jarred or frozen sofrito is fine in a pinch, but making it from scratch has the advantage of allowing you to season the base to your liking. Plus, once you make a giant batch of sofrito, you can freeze the portion that you’re not using in a ziptop bag or quart container, which has all the convenience of buying the base premade but cuts down on cost.

One you have sofrito, what can you do with it? So many tasty things.

In this recipe for Spanish-influenced Chicken Sofrito, the sofrito is added to the pan alongside rice, herbs, spices, chicken stock, and jalepeño to infuse the rice with flavor and spice. The chicken legs are coated in chili powder for extra oomph, but you can always omit that if spicy isn’t your thing.

You can use sofrito as the salsa fresca on your next batch of Huevos Rancheros, as this recipe does. Here the sofrito is fortified with Scotch Bonnet chiles and smoked ham, for an especially savory, spicy touch.

Those sweated onions, peppers, and garlic make the base for an easy, delicious vegetarian black bean soup, made particularly special by the inclusion of a homemade habanero crema.

A big batch of Cuban black beans begins with a sofrito, but you can also adapt it to all kinds of bean dishes if you want to get a little bit creative. The method is the same—add the beans and the liquid that you’re cooking them in to the sofrito and whatever other herbs and spices make sense to you.