Hummingbird Cake Is Carrot Cake for People Who Hate Carrots 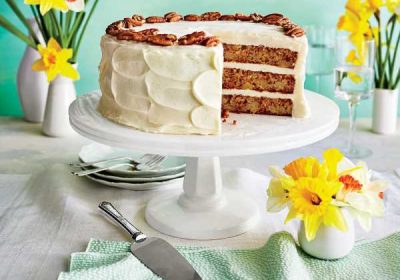 In theory, using fruits and vegetables to sweeten the crumb of a cake is a wonderful thing. In practice, sometimes the vegetables people use are carrots. Though I am personally a fan of carrot cake, I’ve found that it’s a controversial dessert choice. Some people are just not fans of having a vegetable most often associated with crudite in their cake. And so I’ve learned to make a cake that is similar in spirit to carrot cake but includes bananas and pineapple rather than the dreaded carrot: Hummingbird Cake.

I always thought Hummingbird Cake was a Southern thing, but as it turns out, its origins are murky. It’s possible that it originated in Jamaica, or was popularized as part of a Jamaican tourism marketing push. It’s also possible that it was a twist on another cake made to seem more tropical with the addition of pineapple.

Whatever the history, the model of Hummingbird Cake is similar to other fruit-based cakes. You add the fruit to the wet ingredients, fold the whole thing into the dry ingredients, split it between a couple pans, and bake. Much like banana bread, it’s an excellent way to use up overripe bananas. Are your bananas not ripe enough? Throw them in the oven at 300 degrees for 15 to 20 minutes to let the sugars inside the fruit caramelize, and you’ll be just fine.

You can make pretty much make the whole cake in two bowls, not counting the bowl or stand mixer you’re using to make the cream cheese frosting. It’s optional, but it’s a really good option, as are the toasted pecans you sprinkle on top of the cake. Some toasted coconut wouldn’t go awry here, either, or double down on banana with some dried banana chips.

Get the recipe for Hummingbird Cake.