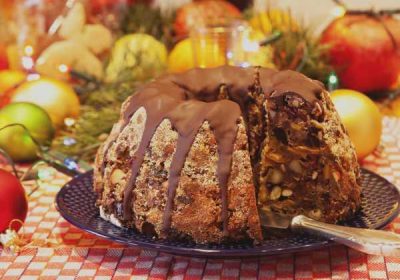 As someone of the Jewish persuasion, I had no experience with fruitcake during my formative years beyond being aware of them as the punchline to a myriad of holiday jokes. I saw them in the stores, and could see how they might be so derided, filled as far as I could tell with a truly ghastly combination of red and green candied fruits, glazed with something that looked suspiciously like snot, and weighing a metric ton. I never saw one at a holiday party or buffet and I knew a lot of people who had them but no one who ate them. This usually either involved some distant relation who insisted upon delivering them, or a cheeky pal who had gifted one as a joke. So, it never occurred to me to have a problem with people being so cruel, or the presumption of terribleness that fruitcake’s mere existence evokes. I had even been known to give the side eye to someone who mentioned liking fruitcake, despite always trying to make a concerted effort not to be dismissive of someone else’s food pleasure. But I mean, fruitcake was sure the exception to that rule, right?

And then, about a decade ago, a small package arrived from New York during the holiday season, from one of my dearest friends and favorite people. Inside a jauntily Hanukah-themed wrap was a small loaf of cake that was redolent of warm spices and a whiff of something boozy, with orange and ginger emanating from the package. I sliced a thin slice off the end of the deep brown loaf, exposing a mosaic of what appeared to be dried fruit and nuts, and took a bite. It was transcendent. Spicy, like good gingerbread, sweet with the fruit and dark toffee flavor, the nuts were crunchy and while there was clearly alcohol in it, it wasn’t overly heady. I brewed some tea and cut another slice. It was just what a cold winter’s afternoon needed. I called my pal Harry and thanked him for the spice cake.

“Fruitcake,” he said. "No," I said, "You sent me a spice cake with fruit and nuts and booze." And he replied, "Yeah, a fruitcake." But it was no ordainary fruitcake. No garish colors, no cloying candied fruits, no glaze, no leadenness. Just a gloriously damp sticky spicy cake holding a staggering amount of dried fruit and nuts. Turns out, it was closer to a Jamaican black cake, and he had found it in an old cookbook and decided to take a gamble. The result was amazing. With a scoop of ice cream? Perfect dessert. On its own? Teatime treat. Sliced and toasted with butter? Breakfast. Sliced thin and toasted crisp? Cheese never met so perfect a plinth. The loaf barely made it five days. I asked for the recipe on day two.

I have made some version of this fruitcake nearly every holiday season since. I have adapted it year by year, sometimes I use brandy, sometimes bourbon, sometimes calvados, sometimes rum. I usually boost the harsher booze with a sweet spirit, Grand Marnier, Drambuie, even ginger liqueur. I use whatever dried fruits I have lying about, usually a combination of dates, figs, apricots, prunes, cherries and raisins, but have included apples, currants and even mulberries in the mix. I always use two different nuts, mostly walnuts and almonds, but pecans and pine nuts have both made appearances. Spices are always mixed, heavy on the cinnamon, light on the clove, and then boosted with everything from nutmeg to mace to allspice to cardamom to ground white pepper for heat. I always use the zest of two oranges and one lemon, and candied ginger.

Essentially, for two loaves, you are going to want 5 cups of mixed dried fruit, any larger pieces cut up, and 3 cups of nuts. Add the zest of two oranges and one lemon, and a quarter cup of chopped candied ginger and toss in a large bowl. Mix a cup of serious liquor, like a brandy, with a half cup of sweet liquor, like Grand Marnier, and a half cup of dark molasses until smooth, then whisk in a total of two and a half teaspoons of warm spices, use what you love. Pour the mix over the fruit and nuts and mix well. Let this hang out for two to five days in a cool spot, giving it a good stir or shake once a day. I often put in a large ziptop bag so I can just smoosh it around.

On the day you want to bake, sprinkle half a cup of flour over the fruit mixture and stir well. Combine another cup and a half of flour with a half-tablespoon of baking powder, a half-teaspoon of baking soda and a teaspoon of kosher salt and sift them together onto a piece of waxed paper (or into a bowl); set aside.

In a stand mixer, cream half a pound of butter with a cup and a half of dark brown sugar; beat well. Add four eggs, one at a time, beating well after each addition; then beat in a half teaspoon of vanilla. Add the combined dry ingredients and beat until batter is well blended and perfectly smooth. Pour batter over fruit and nut mixture and mix until all the pieces of fruit and nuts are coated with batter, trust me, use your hands for this.

Divide batter between two loaf pans that you have greased and lined with parchment paper, then greased and floured, filling them to about 1/2-inch from the top. Bake at 275 for about 2 hours, the cakes will rise to just above the rim of the pan, and the top will crack slightly. It will also pull away slightly from the sides of the pans. A skewer inserted in the center of a cake should come out clean, or with just a little bit of sticky if you hit fruit but be sure there is no raw batter. Cool on a rack for about 30 minutes, then remove from pans and discard the paper. Let finish cooling completely on the rack. If you like your cakes a bit boozier, drizzle another tablespoon or two of liquor over the tops of the cakes. Wrap in plastic and foil and store in a cool spot, or freeze. If you want to keep for months? Soak cheesecloth in booze and wrap the cakes and then wrap in foil.

This recipe can be doubled, for four large loaves, or for making mini loaves for gifting. Just be sure to tell people it is spice cake.