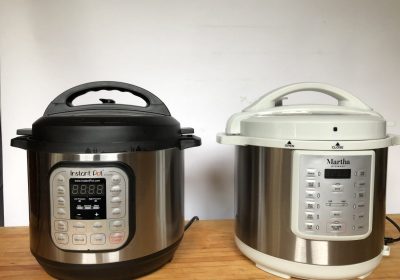 My first reaction when I heard that the queen of domesticity had her own version of the Instant Pot? Of course she does. If there’s one thing most people can agree on, it’s that Martha Stewart is no fool. Even though the electric multi-cooker marketplace is becoming more and more crowded with brands, it makes sense for Stewart to join the fray. Based on her reputation and devoted fan base alone, she can easily divert plenty of dollars that would have gone to Instant Pot into her own company’s pockets.

I recently got my hands on the Martha Stewart 7-in-1 Everything Pressure Cooker, which seems to be sold only on QVC.com. (But it is featured prominently on her brand shop on Amazon — despite not actually being available?) In the course of my work I’ve had to test several multi-cooker brands, including Instant Pot (of course), Mealthy, Crock-Pot, and more, so I couldn’t wait to see what smart innovations Stewart would bring to the table.

Taking it out of the box, I gushed about the color and the sleek design. In a sea of black and stainless steel, Stewart’s very on-brand cream-colored version offers a distinctly classier and more feminine vibe. (Although, yes, Instant Pot now also comes in three fun colors!) I could imagine it fitting nicely in the kinds of light and airy marble-countertop kitchens I dream about.

Other than that, though, it’s pretty standard. It’s a little bit taller than my 8-Quart Instant Pot, and about an inch narrower. It comes with the same basic accessories as the IP — a too-short wire rack (really, the feet on these things need to be a tad taller), a plastic measuring cup and a plastic rice paddle. Although unlike IP, it doesn’t include a ladle. Compared to Instant Pot’s very detailed manual, Stewart’s is short on technical information, but it does have a fair amount of nicely photographed recipes.

Both the Everything Pressure Cooker and Instant Pot’s 8-Quart Duo offer seven functions, 14 pre-set programs, and 1200 watts of power. Both have a delay timer up to 24 hours, so you can get your steel-cut oats set up the night before and have them ready to eat when you wake up. Both sauté well, although IP offers three heat levels instead of just low and high.

I used Stewart’s cookbook and the recipes in the manual to cook jasmine rice, black beans, Cuban Pork Shoulder, Corn Risotto, Sicilian Style Beef Stew (slow cook), and Raspberry Upside Down Cake. I also made my own tomato sauce in it, pressure cooking the tomatoes to break them down, then letting them slow cook on low all night. It worked great. Overall, the Everything pot cooked just as well as my Instant Pot.

The recipes weren’t always perfect (there wasn’t any broth listed in the stew!) but they were tasty — especially the cake. I wouldn’t say her book is the best pressure cooker book out there, though, because most of the recipes are kind of cheats. Instead of being comprised of dishes that can be cooked start-to-finish in the pot, a good half of the recipes are designed to simply use a component, like grains, that have been pressure-cooked, according to a separate chart.

But in terms of the pot’s performance compared to Instant Pot, it holds up well. The biggest differences are in the details. Let’s break it down.

Have you tried Martha’s multi-cooker? What’d you think?