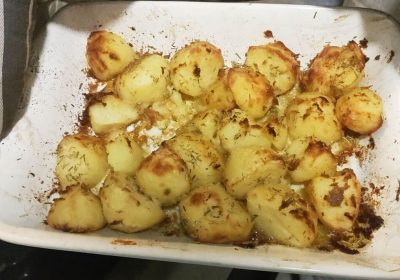 There’s nothing like crispy roast potatoes with a Sunday dinner, so it can be disappointing when you spend hours cooking them in the oven only to find that they’re still not crunchy enough. While I always thought that the key to the perfect texture came from a pre-heated pan of oil to roast the spuds in, a cooking class I attended with chef Millie Simpson, long-serving lieutenant to Michel Roux Jr taught me that the boiling stage is equally as important. I put her own tip to add a splash of white vinegar in the pan at the boiling stage to the test against a rival ingredient – baking soda.

There’s no denying that the perfect roast potatoes are crunchy on the outside and fluffy in the middle but they’re not always easy to achieve in a hurry. Whether you’re prone to burning them or are left with crunchy, broken spuds by the time they reach the table, cooking roasties can be hard to master.

At an exclusive cooking class held at The Langham, London back in November, chef Millie noted that the acidity of vinegar “stops disintegration” when cooking raw potatoes, while also creating a perfectly crispy outer skin once they reach the oven.

However, the majority of other recipes I had seen on the likes of TikTok and Instagram favoured baking soda for the same crunchy results. While cooking roast potatoes using chef Millie’s white vinegar tip had improved the texture of my homemade roasties in the past, I was sceptical about the results that would come from using baking soda instead.

When I tried both hacks myself, there was a clear winner in terms of the crunchy texture, though the taste was the same across the board. Here’s how I did it.

Starting with 1kg of Maris Piper potatoes, I peeled and chopped the entire bag into equal-sized chunks – or thereabouts. To ensure I could accurately compare the two ingredients, I separated the potatoes into two saucepans and two baking trays at each stage of cooking.

After filling two large saucepans up with boiling water straight from the kettle, I added half of the raw spuds to one pan and the rest to the other. I switched on my gas hob to heat both pans on equal-sized rings.

Before leaving the potatoes to cook for around 15 minutes, I added one-quarter of a teaspoon of baking soda to one pan, and two dessert spoons (roughly one tablespoon) of white wine vinegar to the other pan.

While they boiled, I noticed that the baking soda pan spilt over with white foam several times while the vinegar water filled my kitchen with its recognisable scent. During this time I filled two large oven trays with a generous amount of olive oil and placed both in a preheated oven at 220C.

Another thing to point out during the boiling stage was that the baking soda potatoes were more crumbled that the vinegar potatoes which supports chef Millie’s claim that the acidity prevents disintegration.

Once the potatoes were soft enough to pierce with a fork, I took them off the heat and drained each pan one at a time.

Next, I placed the drained baking soda potatoes onto a separate tray to “dry off” – another tip Millie noted was crucial for “totally golden” and crunchy roasties. After repeating this step with the vinegar potatoes, I left them to dry off for around seven minutes.

I then removed the hot oil trays from the oven and made a start on loading them up with the dry potatoes. I did this one at a time using a pair of tongs to avoid splashing the oil onto myself.

For the experiment, I placed those cooked with baking soda into the white dish and the vinegar spuds in the silver tray.

Once the potatoes had been separated into the hot oil trays, I sprinkled them with pink Himalayan salt and some dried rosemary.

I placed each tray into the oven and set a timer for 50 minutes where I left the potatoes to roast at 200C. While most people shake the tray halfway through cooking, chef Millie taught me that this “chuffing method” should be avoided to ensure you get the perfect mix of crunchiness and fluffiness.

Instead, I turned each potato using tongs at the 25-minute mark before leaving them to cook. I did forget to add garlic to the trays, so I also sprinkled some dried garlic granules over each batch of potatoes at this point too.

By this point, the potatoes cooked with baking soda were noticeably more crispy and had a more even gold tone on the skin. Those cooked with white vinegar appeared crunchy in places though they had a more leathery skin with a light golden shade.

Once cooked, I removed the two trays from the oven to check the final results. The baking soda spuds had considerably more small, crunchy bits in the pan than the vinegar ones which were whole and looked neater.

Both ingredients successfully produced a perfectly fluffy core in each potato with crispy skin, though the crunch was much better on the potatoes boiled with baking soda. And when it came to the overall taste test and texture, it remained the clear winner for me.

On a blind taste test with my dinner guests, they agreed that the baking soda potatoes had that bite that you look for in roast potatoes.

How do you cook your roast potatoes? Let us know in the comments below.