Home » Everyday Meals » If You're a Fan of French Fries, You'll Love This Healthy Italian Alternative Made From Chickpeas

If You're a Fan of French Fries, You'll Love This Healthy Italian Alternative Made From Chickpeas 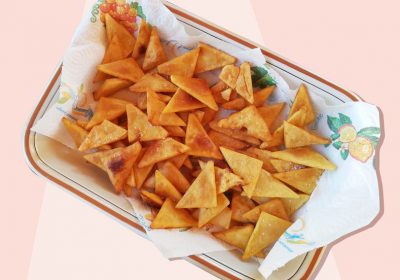 There isn’t much wrong with regular old potato fries. Sometimes, though, you may crave something similar but different. An old-school Sicilian street food called panelle—like standard potato fries but made from chickpeas—can be an elegant fry alternative. Panelle differ in that they’re healthier, have an airy-crisp bite free of meaty density, and pack a more delicate, nuanced flavor that channels the spirit of the fresh legume.

And the two are similar, crucially, in the hot comfort they bring.

Making panelle is rewarding. It is easily worth the small effort. The resulting fries—shaped not like fingers, but flat moons or half-moons—make for a great opener, snack, or side dish, much like potato fries. In the old country, people even slide them onto buns, making for a soft sandwich.

Like many Mediterranean foods, the beauty of panelle lies in simplicity. The only ingredient they require that you might not already have is chickpea flour. The other ingredients: salt, pepper, an herb like parsley (optional), and your go-to frying oil. A good finishing salt helps, too.

Before we dive into the panelle cooking method, please note that they require some serious whisking. But hey, in Sicily the street food vendors have been known to sizzle panelle in tiny three-wheelers, so how hard can it be?

To start, measure your ingredients. You’ll need, by weight, one part chickpea flour to three-and-a-half parts cool water. Using a scale is the most foolproof way to gauge here. (Starting with 6 ounces of chickpea flour will yield enough panelle for about four people to snack on.)

The goal of the nonstop whisking is to dissolve the chickpea flour into the water. As you whisk continuously, the chickpea flour should turn opaque and milky, with a light brown color that resembles Dijon mustard. The flour may clot a little on the bottom as the pot heats. Your whisking will break the clotting, keeping the water smooth. With the water below a boil and at a strong simmer, you want to whisk for about 10 minutes, the full duration of the cooking. (As you whisk, add salt, pepper, and herbs if you want them.) By the time you’re done, the chickpea-water mixture should be thick and gloppy, like cake batter.

Next step: shape your cooked chickpea mixture for frying.

There are a few ways to proceed here. Some people use circular surfaces. Some use sheet pans laid with wax paper. I recommend a drinking glass, a nice tall and wide one.

Slick the entire inside of the glass with olive oil (for non-stick purposes). Then spoon the gloppy chickpea-water mixture into the glass, trying your best to fill in any air pockets that may form between spoonings. Over the next 20 minutes, the mixture will congeal, not unlike polenta. When it has fully congealed, slide it out from the glass in one wobbly piece. It will take the jiggling form of the glass, just like the canned cranberry sauce on Thanksgiving.

Time to fry! Slice your cylindrical mass into rounds no thicker than half an inch. If you want, you can cut these rounds in half, so that they form half-moons, a nimbler shape that will prove easier to work with. Over medium-high heat, with enough frying oil in a pot to cover your moons or half-moons, add them to the sizzling oil, giving them space. They’ll take four or five minutes on the first side, two or three on the second. The goal is a deep golden crust, one with a bare hint of walnut-brown.

And when your batches are done, you’ll have a bowl or tray of panelle. Wait for them to cool. Finish them with salt. Eat them as soon as possible, when their thin vegetal flavor and ethereal texture are at peak. A few lacy bites in, classic potato fries will feel close but far away.