Home » Everyday Meals » In Praise of the Vending Machine

In Praise of the Vending Machine 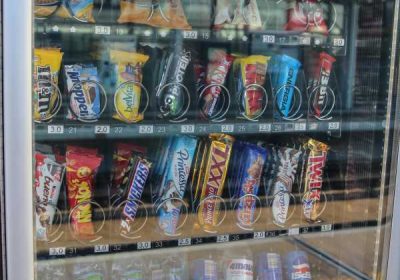 They’re around every corner in the airport when you need a quick slug of caffeine. They’re in the break room when you’ve forgotten your lunch and spy a package of peanut butter crackers calling your name. They never have a line that’s too long, and never makes you wait for a table. Yes, vending machines are a trusty ally that continue to play an outsized role in how we snack and sip throughout the day. Often overlooked, but always reliable, these friendly food and drink dispensers are constantly there in a pinch—and it’s time they get the credit they deserve.

The first coin-operated vending machine was created in London during the late 1880s as a means of selling postcards. The concept soon caught on in the United States, where the Thomas Adams Gum Company used the technology to begin selling packets of gum to commuters on train platforms in New York. Since then, vending machines have grown to sell everything from classic goods—like Pringles and Snickers bars—to some downright impressive (and strange) things in our modern era. They’re on street corners in small towns, in hospitals and auto dealerships, and in many cases, public schools. I remember the middle school thrill of getting a Fruitopia from a hallway vending machine, my crumpled-up dollar bill finally accepted by the persnickety machine. (Never would I have imagined then that, years later, I’d be getting a tiny bottle of champagne from a vending machine in London.)

Today, vending machine makers seem determined to prove that literally anything can be created and dispensed via the power of mechanics. China has a vending machine for live crab. There’s a burrito vending machine in Los Angeles, and wildly popular pizza vending machines across Italy. Pecan pies are all the vending machine rage in Cedar Creek, Texas, and there are multiple companies around the world—from Russia to France—that have created their own version of a French fry vending machine, complete with condiments. What a city or country decides to prioritize by putting in a vending machine is something of a cultural litmus test for what foods they see as being the most deeply engrained in society.

So while in the United States we still largely associate vending machines with cartoon tropes (like Homer Simpson getting his hand stuck while trying to steal candy), it’s time we adopt a Japanese level of reverence. There’s a food holiday for just about everything now, so why not launch National Vending Machine Day? I guarantee everyone would have a story about a time a vending machine—whether old-fashioned or new-fangled—came through for them.