James Martin: Chef shares how to make peppercorn sauce with steak in less than 10 minutes 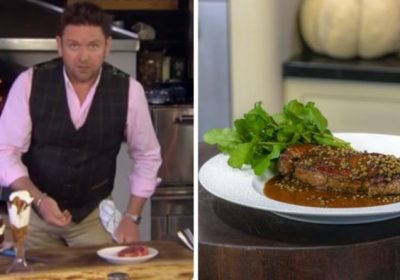 Today, a viewer named Elsa called into the show from Yeoville.

She wanted to know how to make peppercorn sauce to accompany Sirloin steak.

As always, James had the answer at the ready.

He explained how to cook both a steak and peppercorn sauce in less than 10 minutes.

Firstly, the chef took a steak and sprinkled some black peppercorn on either side of it, after squashing the corns with a back of a knife.

He warned not to use pink peppercorns as they “are too floral, they’re not strong”.

James put the steak on the barbecue to cook.

Steaks are perfect barbecue foods and can be cooked to anything from a medium rare to a well done in minutes.

James then turned his attention to the peppercorn sauce.

He diced a shallot because “they are milder than onions” and showed viewers the other ingredients.

These were veal stock, which is available in supermarkets in “pouches”, double cream, and green peppercorns.

James placed a pan on the stove and threw some butter in, before adding the diced shallot.

The chef then recommended adding a little brandy to the pan, adding: “But if you don’t want to use brandy, use a little bit of white wine.”

He poured some of the brandy into the pan before adding the veal stock, then the cream, and then the green peppercorns.

The chef said: “To enrich it, add a little butter at the end and bring it to the boil.”

Right at the end, James advised sprinkling in an Oxo cube, which he described as a “game changer”.

“If it starts to make your right leg shake, it’s ready,” James joked.

The chef placed the steak on a plate and poured the finished peppercorn sauce on top of it.

He said: “You have a lovely rich peppercorn sauce that you can pop over your steak.”

Peppercorn sauce and steak is an easy meal that is both quick to make and delicious to taste.

It is best served with chips or potatoes and vegetables or salad.