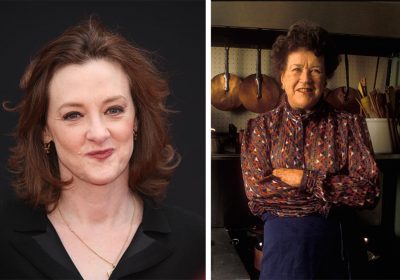 According to TVLine.com, Joan Cusack is in talks with HBO Max to play Julia Child in an upcoming drama series. HBO Max is the upcoming new streaming network that HBO will be launching in the spring of next year. Joan Cusack is the comedian and actress who has been in all sorts of movies and television shows, dating back to the 1980s, including a stint on SNL, In & Out, Grosse Pointe Blank, and as Jessie in the Toy Story series.

Given the familiarity of the American audience with Julia’s actual television presence, plus the impeccable version previously brought to screen by Meryl Streep in Julie and Julia in 2009, playing the iconic godmother of American food television is a tall order (both literally and figuratively: Child towered at 6’2”, a full five inches over Cusack and eight over Streep).

Streep’s performance not only won acclaim for its spot-on impression of Child, but it also spawned a movement to cut out all the parts of the movie that didn’t center on her. Still, Child’s unique voice and warm-but-imposing presence seem like a good fit for Cusack. And clearly there’s no shortage of people looking to learn more about Child, intrigued by her fascinating story and late-in-life rise to small-screen stardom.

The show, which does not yet have a name, has already signed on writer Daniel Goldfarb, known for his work on Amazon’s hit The Marvelous Mrs. Maisel. HBO Max has not yet given official word, though, so for now, everything is speculation. That means we’re likely still a long way from getting to watch Cusack’s take on the cooking icon. In the meantime, now is the perfect time to binge-watch a few favorite episodes of her iconic show.