Home » Everyday Meals » KFC Wants to Pay For Your Wedding

KFC Wants to Pay For Your Wedding 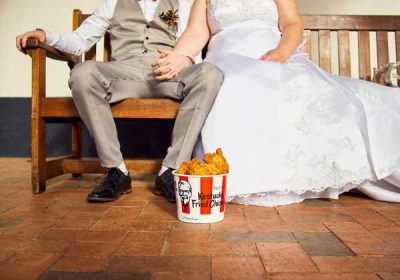 Recently, KFC announced it was releasing a dating sim wherein players would have the chance to woo a sexed-up version of the chicken chain’s genteel southern mascot. Now, they’re about to bring the concept of fast food-branded romance into the real world for a handful of lucky couples looking to tie the knot.

That’s because KFC is letting six lucky couples win the chance to make KFC a big part of their wedding day, offering the perfect opportunity to commemorate your mutual love for fried chicken while disappointing your parents. As the contest website says, “If you can’t think of anything more romantic than sharing a bucket of the Colonel's finest with your one true love, then get ready to say Bucket. Why not? to a KFC Wedding.”

So what exactly does a KFC Wedding involve? Great question. Obviously, they’ll be catering the thing, providing buckets of fried chicken for up to 200 guests out of a food truck that’ll arrive at whatever venue you’ve got booked. KFC will also throw in a wedding officiant, (thereby saving one of your friends from having to get ordained online), a KFC-themed photo booth, and “KFC themed music entertainment.” Does that last part mean you’ll get a standard wedding band who works KFC references into covers of Bruno Mars songs, or a bunch of musicians in Colonel Sanders garb strumming banjos? You’ll just have to score an invite to find out.

Of course, KFC isn’t taking care of everything. The engaged couple (thankfully) gets to pick the venue, and is responsible for things like invitations, transportation, etc. Anyone who doesn’t eat fried chicken for dietary reasons is also out of luck, and KFC isn’t providing any booze. And you really don’t want to make your friends and family show up to a fast food-themed wedding without offering them copious amounts of alcohol.

There’s a big catch, however: you have to be an Australian resident with a wedding falling sometime between November 2019 and May 2020 to qualify (which seems like a window of time without many weddings until you realize that our winter is Australia’s summer). Couples have until October 18th to apply, and their entries will be judged on “originality, creative merit, and independent expression.”

So if you think your love is the missing 12th herb or spice that makes KFC what it is (and you’re Australian), why not try to make them a part of your special day. And if your insistence on a KFC wedding precipitates an eventual divorce, I’m sure the Colonel will be there for you then, too.