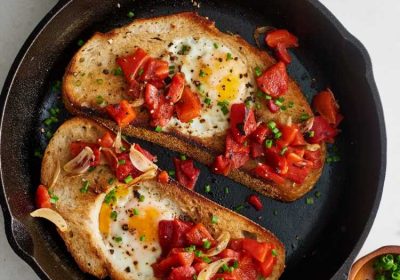 If you’ve ever made an egg-in-a-hole — an egg cracked inside a slice of bread and fried to crisp perfection — you know it’s easy, tasty, and, most importantly, fun. Why have your egg on top of your toast when you could have it nestled inside? Everyone has their own way of preparing the dish, and their own name for it, too: We’ve heard egg-in-a-basket and even toad-in-a-hole. But the version we’re sharing here, inspired by the late ’80s romantic comedy Moonstruck, might just be the very first one to exist.

Our Tasty Rendition of “Moonstruck Eggs”

The origins of egg-in-a-hole are a little fuzzy, but one thing we do know is that the dish was made for Cher’s character, Loretta, in the movie Moonstruck. In the scene, Loretta’s mom prepares Loretta an egg-in-a-hole topped with red peppers in a cast iron skillet. Our twist on the Moonstruck version involves searing a roasted red pepper with some garlic before the bread and egg are cooked. The garlicky pepper is then piled onto the egg-in-a-hole for a knife-and-fork breakfast that’s homey, yet special. We think Loretta would approve.