Necco Wafers Are Coming Back After a Two-Year Absence 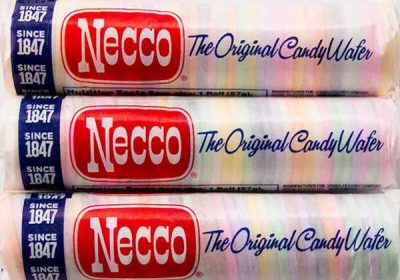 With a global pandemic still going, there are a lot of foods and food experiences we’re all missing right now. Eating at a restaurant (in most places). Microwaving some frozen French fries. Paying normal prices for eggs. It’s hard to say when we’ll get back to what we’re used to.

But if you for some reason have been craving Necco Wafers, well, the good news is that those can soon be back in your life. After a two-year hiatus, the very, very old-school candy is back on store shelves. That faint sound you're hearing is America’s senior citizens rejoicing.

The revival comes thanks to Spangler Candy Company, who purchased the brand out of bankruptcy. The new ownership has made a point to not mess with the formulation of the enduring candy, meaning it’s remained largely unchanged since Necco Wafers were invented all the way back in 1847. That makes them a period-accurate addition to your next Civil War reenactment getup.

For those who have never had Necco Wafers before but want to experience what eating candy was like back when James K. Polk was president, they’re sold as a wax paper roll filled with vaguely chalky discs available in eight colorful flavors: lemon (yellow), lime (green), orange (take a guess), clove (a light purple), cinnamon (white), wintergreen (pink), licorice (dark grey), and chocolate (brown). The first seven of those flavors are essentially unchanged from 170 years ago, but recent production improvements have lended the chocolate wafer “a richer cocoa flavor,” according to a press release.

If you’re worried about supply issues, fear not. “We know fans have been waiting anxiously for the return of Necco Wafers and anticipate high demand,” Kirk Vashaw, Spangler Candy Company CEO said in the press release. “Our production lines will continue to run as fast as possible to keep stores in-stock.”

So whether you’re a candy historian, a serious Necco-head, or just looking for something new to try during this boring time, the Wafers are back. Just make sure you save some for the rest of us.