Home » Everyday Meals » 'New Coke' Is Coming Back This Summer, Thanks to 'Stranger Things'

'New Coke' Is Coming Back This Summer, Thanks to 'Stranger Things' 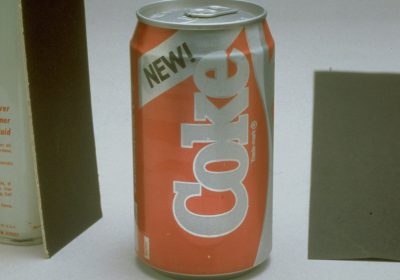 What Crystal Pepsi was to the 1990s, New Coke was to the '80s. With the cola wars in full swing, the competition to out-do one another meant multi-million dollar, celebrity-filled ad campaigns and some less-than-successful product innovations. In 1985, the Coca-Cola Company made an ill-fated attempt to improve its core product by changing the formula up. The idea was that a newer, better-tasting Coke might win over customers as Pepsi has launched its Pepsi Challenge a few years before with (at least according to Pepsi commercials) results that weren't so favorable to Coke. But customers, by and large, rejected New Coke, as it was dubbed, because, well, Coca-Cola was pretty great as it was. Eventually, Coca-Cola bounced back with the old formula dubbed Coca-Cola Classic, and the brand's flagship cola hasn't looked back since (other than a few new flavors).

But this summer, a new generation will get to experience New Coke by way of a TV series that mines 1980s nostalgia to create a backdrop for the creepy adventures of five kids living in Hawkins, Indiana. Season three of Stranger Things hits Netflix on July 4 and takes place in the summer of 1985 (just a couple months after New Coke's April launch). As part of an official partnership between the series and soft drink brand, New Coke will return in limited quantities to a decidedly un-1980s retail space: The internet.

Starting at 5 p.m ET on Thursday, May 23, 12-ounce cans of New Coke will be available as a gift with purchase at CokeStore.com/1985, which will also feature limited-edition, numbered Stranger Things-themed glass bottles of Coca-Cola and Coke Zero Sugar. The cans will also be available on select days at World of Coca-Cola in Atlanta (with admission) and at the Coca-Cola Store in Las Vegas the week of June 3, while supplies last.

In grocery stores and other retailers, Stranger Things and Coke fans can expect to find 16-ounce cans of Coke Original Taste with the 1985 serif-font "Enjoy Coke" logo, as well as The Upside Down-inspired cans of Coke Zero Sugar in early June.