‘No crisps!’ Sainsbury’s and Co-op run out of staple product in latest food shortage chaos 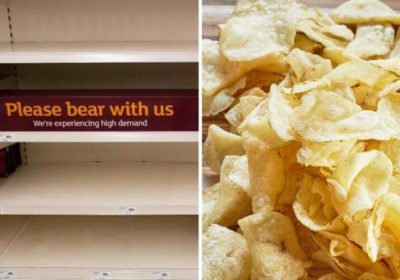 In recent weeks and months, supermarkets have been increasingly running out of products due to a variety of reasons. Brexit and the pandemic are to blame for the lack of water bottles, Haribo, fish and chips – and now crisps – in Britain.

Customers have taken to social media this week to complain about the crisp shortages currently hitting shops.

Photos have been shared of empty shelves in both Sainsbury’s and Co-op.

Crisps is the latest addition to a long list of products that have been lacking in supermarkets in recent weeks and even months.

The British Retail Consortium (BRC) has confirmed the crisp shortages are due to a lack of lorry drivers across the UK.

A spokesperson for the BRC said the problem was likely “a side effect of the HGV driver issue in some areas”.

Britain has faced a shortage of HGV lorry drivers for over a year.

This is due to EU citizens working in the UK returning home during the pandemic.

The Road Haulage Association (RHA) has estimated that there is now a shortage of more than 100,000 drivers in the UK.

Before the pandemic, there were 600,000 lorry drivers in the country.

Co-op has this week responded to its crisp shortage after customers shared photos of empty shelves and out-of-stock notices on Twitter.

A spokesperson for the company said: “Like many retailers, we are impacted by some patchy disruption to our deliveries and store operations, but we are working closely with our suppliers to get restocked quickly.”

Co-op is currently recruiting up to 3,000 temporary staff to help keep depots working to capacity and stores stocked.

Meanwhile, Sainsbury’s customers have also noticed a lack of crisps in the supermarket’s stores this week.

One person wrote on Twitter: “Went to a Sainsbury’s near me yesterday, and saw a handful of quite bare shelves. Bottled drinks and crisps were badly affected.”

Another person commented: “Our Sainsburys had no crisps at the weekend.”

One customer said: “Local Sainsbury’s had no crisps last week.”

Another shopper wrote: “My Sainsburys had a lot of empty shelves when I went a week ago.”

A Sainsbury’s spokesperson commented on the recent shortage, saying: “We are working hard to ensure customers can find what they need.

“While we might not always have the exact product a customer is looking for in every store, large quantities of products are being delivered to stores daily and our colleagues are focused on getting them onto the shelves as quickly as they can.”

The lack of crisps in supermarkets could worsen in the coming weeks due to dwindling potato supplies.

Potato growers and processors have been heavily impacted by the devastating floods which have destroyed parts of Europe in recent weeks.

Rachel Dobson, Managing Director at Lynx Purchasing, said this will have a “knock-on effect on availability of UK-grown potatoes”.

This could lead to a shortage of potatoes and chips.

Ms Dobson said: “The recent floods in Europe have affected potato growers and processors in the region, with varieties grown for frozen chips particularly affected.

“It means that UK pubs and restaurants serving popular dishes like fish and chips could find their usual supplier isn’t able to deliver.

“The shortage abroad is likely to have a knock-on effect on availability of UK-grown potatoes.

“Come Christmas, we could find that the roast potato, a staple of festive dinners, is also in short supply.”