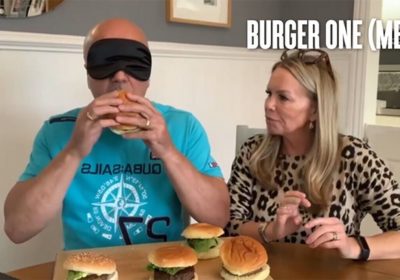 A survey has found that one in five Brits have been tricked into eating plant-based food by their partner and didn’t even realise it. Of the 2,000 British adults polled, more than a third (35 per cent) of those who had been fooled said they actually preferred the meat-free option over the real thing after eating it.

Neville Tam, at The No Meat Company, which commissioned the research to launch its Ultimate Burger, said: “It’s fascinating to see how our preconceptions can affect our taste buds. Often, people can have strong opinions on foods without even having tried them first, so it does sometimes take a bit of trickery to get them on board.”

To put the meat trick to the test, Gogglebox star Lisa Baggs challenged her husband Terry to a burger blind taste test, with a selection of meat and plant-based options.

Meat lover Terry was unable to spot the meat-free alternatives from the line-up, saying he would consider eating them again in future.

The study also found 41 per cent of those polled had preconceptions of what meat-free alternatives were like before they tried them. However, a quarter were pleasantly surprised with how they tasted, while 43 per cent considered eating them to be a positive experience.

Of those who still include meat in their diet, 37 per cent have “Meat Free Mondays” – with more than half (56 per cent) considering alternative products to be much closer to the “real thing” now than they were a decade ago.

A love for meat and dairy, and the cost considerations, are among the reasons why people have not yet become a fully-fledged vegan or vegetarian. That, and nearly one in four (23 per cent) think life is too short to deprive themselves of something pleasurable.

Despite this, three in ten reckon eating a plant-based diet is good for them, while 20% class it as being “trendy”.

The average adult knows five vegans or veggies – and 34 per cent even claim they suspect at least one of them is doing it just because it’s considered cool. It also emerged 38 per cent of those with children have tried to trick their kids into eating a meat or dairy alternative – with four in ten claiming they didn’t notice.

The study, conducted via OnePoll, found 41 per cent have also been the ones to trick their other half – with more than a fifth (22 per cent) proving successful. However, 29 per cent got into an argument over the attempt to disguise what they were really eating.

“You will never know if you like something until you try it, so our advice would be to put preconceptions to one side and let your tastebuds do the talking.”