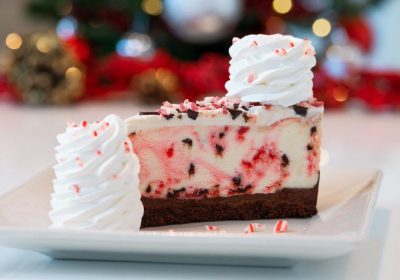 It’s the most wonderful time of the year: peppermint season. While weird candy canes and the presence or absence of peppermint-flavored beverages get most of the attention, don’t sleep on the peppermint party going on over at the Cheesecake Factory.

That’s because they’ve brought back their very own peppermint bark-ified take on their namesake dessert, now available at their many fine casual dining locations scattered across the country.

Watch: How to Make The Cheesecake Factory Original Cheesecake

If for some reason you’re a peppermint hater but just need to have dessert at the Cheesecake factory, there are other new options in play as well. Specifically, you can opt for the pineapple upside-down cheesecake, which slides pineapple cheesecake between two layers of pineapple upside down cake for more of a Christmas in Hawaii vibe. There’s also plenty more cheesecake where that came from, since that’s kind of, you know, their whole thing.

So if peppermint is the reason for the season as far as you’re concerned, you’re going to want to give yourself the gift of this peppermint cheesecake from the only restaurant chain brave enough to put cheesecake right in its name. They’re ready for you.