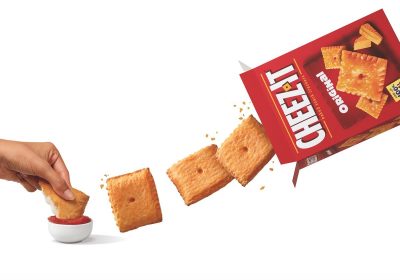 Though many of their sitdown locations might be closing and they’ve tinkered with their recipe, absolutely nothing will stop Pizza Hut from doing what it does best: presenting cheese in weird and unexpected formats. In the latest and perhaps most visually striking stunt, it seems as if they’re ditching the pizza entirely in favor of a different familiar snack.

This week, Pizza Hut spawned the Stuffed Cheez-It Pizza. Given their past track record of adding cheese and other edible accessories in or around the crust, you’d be forgiven for assuming that said Stuffed Cheez-It Pizza is some kind of stuffed crust pizza adorned with the salty, cheddar flavored snack. But that’s where you’re wrong. In a move that’s simultaneously innovative and unsettling, Pizza Hut instead decided to make the entire pizza into an oversized Cheez-It.

In essence, it’s more like a giant cal/P’zone than its name would have you believe. Each order (which can be filled with pepperoni in addition to the cheese, if you so choose) comes with four of these giant cheese-stuffed Cheez-Its, complete with a marinara dipping sauce to turn it into a sort of DIY pizza that is also an oversized cracker.

According to Pizza Hut, this was an attempt to do something crazy just because they can. “We pride ourselves on being the go-to for unexpected pizza innovations, and I can’t think of a more badass partner than Cheez-It to bring our next original menu item to life,” Chief Brand Officer Marianne Radley said in a press release. The release also notes that turning a snack into a pizza that only a non-sober person could love was an effort to connect with the chain’s biggest audience: college students.

What’s interesting is that this adds a new heretofore unseen cheddar flavor to Pizza Hut’s offerings. For what it’s worth, Taco Bell, a fast food restaurant that frequently Pizza Hut, recently introduced a toasted cheddar chalupa. So it seems like Yum Brands is betting big on people liking to eat a different type of cheese than you’d usually find at a combination Pizza Hut and Taco Bell.

So, yes. A Cheez-It can also be a pizza, kind of. I’m surprised they didn’t opt for some sort of weird Dorito calzone given the success of Taco Bell’s Doritos Locos tacos, but I wouldn’t totally rule out something that ridiculous happening in the near future anyway.